Arbutus Greenway: some ideas for the path ahead

Earlier this year, the City of Vancouver announced that it had reached a deal with CP Rail to purchase the Arbutus corridor, a former railway right-of-way. The intention, as stated at the time, was to create a linear greenway, with the further potential for streetcar use. Since that time, planning for the new public space has continued apace.

In late September, the VPSN participated in an initial series of workshops to discuss the creation of a temporary pathway for public use. We followed that up with a formal letter outlining our assessment of the possibilities for both the initial path, and the considerations that we thought should be taken into account with a permanent path.

The following is an excerpt of that letter, which we sent in early October.

The VPSN supports the City’s initiative in seeking to construct a temporary pathway in the near term, with the eventual goal of creating a more permanent sustainable transportation corridor – and public space – unlike any that currently exist within the city. Once completed, the new greenway will be a true asset for residents and visitors to Vancouver. We see great potential for the greenway to go far beyond a safe, comfortable and functional transportation corridor, to become a meaningful place and a destination in its own right.

With that in mind, we have participated in the recent City-led workshops and would like to take this opportunity to highlight a few considerations pertinent to both the design and the decision-making around the temporary and permanent paths.

The choices surrounding the temporary path will shape the extent to which residents will contribute to incorporating the greenway as an appreciable presence in the city over the long term. To that end, the VPSN strongly supports the creation temporary and permanent pathways that are safe, separated and accessible to users of all abilities. This emphasis is in keeping with the City’s position, expressed at the workshops, that safety and accessibility are the two “non-negotiable” variables in the pathway design.

Here are our specific recommendations for the temporary pathway:

(1) Surface materials: While gravel may provide a more ‘natural,’ permeable quality, the VPSN supports the use of asphalt as it will allow the greenway to be used by the greatest range of mobilities. Where standard black asphalt may ‘read’ like roadway, dyed asphalt may help to create pathway that is more visually compatible with the greenway. We would further urge the consideration of permeable asphalt or other paving materials that support stormwater filtration.

(2) Separated paths: To promote safety as well as clarity between users of differing modes, levels of ability and confidence, we support the provision of separate paved paths for cyclists and pedestrians. Experiences on the seawall shared paths have consistently shown that cyclists and pedestrians don’t mix well beyond a certain volume of users. If greenway width allows, perhaps there are even locations where a third path made of gravel could parallel the two main paved paths, in recognition of the fact that many Vancouverites have made it clear that they are seeking more natural materials underfoot.

(3) Optimizing public realm expenditures: The VPSN appreciates the City’s interest in building a temporary pathway that will meet residents’ needs while a more permanent pathway is designed. That said, given the expense, we encourage the City to seek opportunities to minimize the amount of work that needs to be redone later. Where possible, we feel the City should create the best pathway from the beginning so that it won’t need to be replaced entirely when permanent construction begins.

With regard to longer-term planning for the permanent greenway, we recommend the following:

(4) Existing bicycle routes: As the City plans the Arbutus Greenway, we suggest some consideration be given to the role and function of nearby designated bicycle routes (e.g. Trafalgar/Valley, Cypress/Angus). Given the potential for high user-volumes on the greenway, having good parallel routes will help discourage the sorts of conflicts between commuter cyclists and recreational cyclists that has occurred on other popular pathways. (A positive precedent: the Seaside Bypass functions as a good alternative route in relation to the seawall).

(5) Safety features: Lighting, emergency call boxes, multilingual wayfinding and safe crossings with appropriate signage at arterial cross-streets are all important components. Sufficient illumination must be provided for the safety of greenway users without creating “light pollution” – which impacts residents and wildlife alike. At the workshops, the City indicated that it might pilot a project for indirect lighting on the greenway, which we support provided that it offers sufficient brightness for safety. 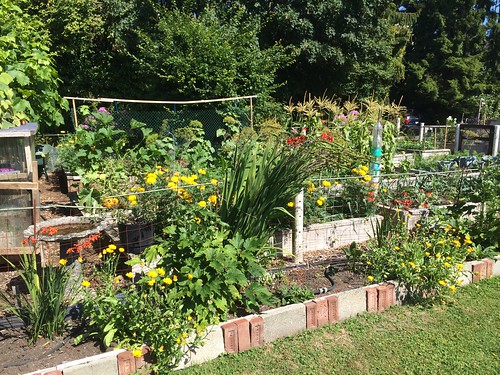 (6) Sustainability: To the extent that the City itself introduces landscaping, we wholeheartedly endorse drought-resistant native species, including indigenous grasses. We discourage commercial grass and turf, which drain water resources, invite chafer beetle infestation, and would serve little functional purpose on the greenway’s border areas. We encourage the City to consider using parts of the greenway to support – and pilot – sustainable landscaping practices, including permaculture design, pollinator gardens, edible landscaping, and test alternatives (example: the City of Coquitlam is testling lawn alternatives to defer chafer beetles). http://www.tricitynews.com/news/coquitlam-plants-lawn-alternatives-to-deter-chafer-beetles-1.2192814.

(7) Community ambience and cityscapes: The greenway passes through an engaging diversity of environments, and connects many key assets (including an array of community gardens, City Farmer, and other key sites). At the workshops we attended, residents strongly supported the idea of maintaining the greenway’s community feel. We support this, as it ensures a strong and authentic ‘sense of place’ is fostered as part of the greenway design. Attention should be paid to balancing the greenway’s movement function with this community ambience, and we encourage investigating future stewardship options that enshrine attention to this balance.

(8) Comfort and amenities: In order for public spaces to support a wide range of users, they require comfort-enhancing amenities. Benches, tables, drinking fountains and washrooms should be placed at appropriate junctures along the greenway.

We further support in principle the idea (identified by the City) of buying decommissioned CP cars and converting them into coffee shops or comfort stations along the path (akin to San Francisco’s collecting vintage streetcars from around the world and putting them back into actual use on its own streets). The balance between enhancing public space through economic activity, and overly commercializing the space is a delicate one. Our support is tempered by desire to see further discussion on the nature of any such commercial activity so that the various considerations at play can be explored more fully.

(9) Safety: Could be supported and enhanced by ensuring that greenway design enables good natural surveillance and incorporates CPTED design principles. As with other public spaces, VPD bike and mounted police units could also be considered if warranted.

(10) Railway heritage components: We are heartened at statements made during the workshops that the City is paying attention to incorporating or otherwise retaining heritage railway markers along the Arbutus Greenway. We encourage the incorporation of the preserved decommissioned tracks as decorative elements and urge the City to leave existing railway markers in place (these include the short wooden poles in Kerrisdale Village, the decommissioned wooden utility poles south of 16th). Where railroad crossing signs and lights have to be removed by regulation (from 12th, 41st, etc.), we recommend that the City refurbish and transplant these signs as decorative elements elsewhere on the corridor.

(11) Other placemaking opportunities: Finally, the opportunity to further enhance the greenway through other community-led placemaking opportunities should not be overlooked. Part of the appeal of the greenway relates to its history of incremental additions by members of the adjacent communities (primarily in the form of gardens, but also other gathering areas, community art and other initiatives). Supporting community members to engage with, and steward, the greenway in this fashion is key. So too is the opportunity to enable other placemaking activities. An enabling approach such as this could support reconciliation with local First Nations, foster a greater sense of inclusion for newcomers, or provide a new and different type of canvas for members of the city’s artistic community.