Later today, City Council will be discussing a report and recommendations that will have a number of implications for the City’s public plazas.

The report, written by the City’s Planning Department, focuses on Davie Village Public Space Improvements – and seeks Council approval for the final concept for Jim Deva Plaza (at Bute and Davie).

As we’ve noted in earlier posts, we’re quite supportive of this initiative. The new plaza will serve as a vibrant neighbourood gathering area for residents and visitors alike.

Importantly, the report also does two other things. First, it looks at the question of stewardship – and proposes a pilot strategy for the site that aims to help with maintenance, programming and other activities. Programs such as this, when properly developed and delivered, can be very helpful for enriching public spaces. Perhaps even more significantly, the report seeks Council approval to undertake a larger city-wide review of plaza stewardship, a process that the VPSN has committed to assisting.

Second, the report recommends some changes to several bylaws – including the Health Bylaw (no smoking in the plaza) and the Street and Traffic Bylaw. The latter regulatory change has some good aspects (e.g. prohibiting driving in the plaza), but also has one troubling aspect: it aims to prohibit use of the plaza “after hours.” In particular, the proposed text prohibits people from using the plaza “after hours” – between 11pm and 6am – under penalty of a $100 fine. The only thing you’re legally allowed to do after 11pm in this prominent space… is walk or bike through it. 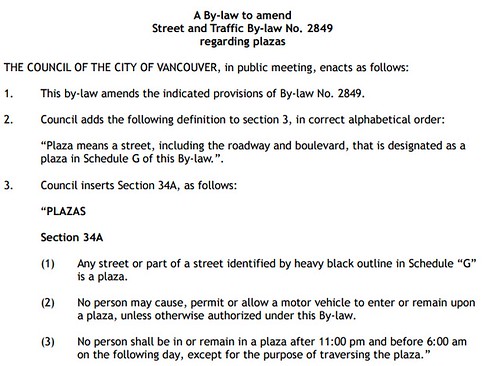 We feel that this proposed amendment for plazas is a problem (as, for that matter, is the longer-standing precedent that exists within the City’s parks and Park Bylaw).

Public nuisance – after hours noise, disturbance, fighting, and a host of other forms of problem behaviour – is already disallowed through a variety of bylaws. This “new” bylaw therefore doesn’t do anything more to mitigate potential problems. What it does do is penalize legitimate nighttime users of a public space – including the sorts of users/activities illustrated in the City’s own rendering of the Plaza. All this, in a place (Davie Village) where there’s reason to assume that a bit more vibrant nighttime activity – not to mention ‘eyes on the street’ – would actually be desirable. 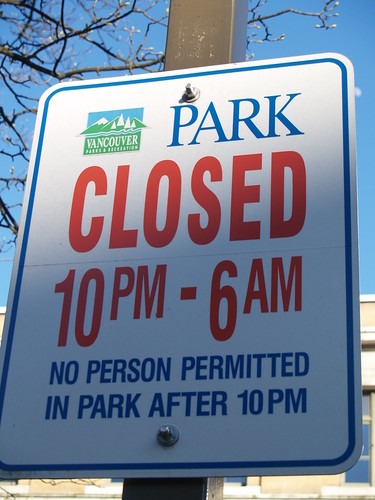 We’ve written to City Council to offer our support for the good stuff in the Council report — and to request that the proposed “after hours” amendment to the Street and Traffic Bylaw be dropped. An excerpt of our letter is found below.

…the VPSN is very supportive of the proposed design for Jim Deva Plaza. We’ve participated in the process of developing the concepts for the site and are pleased with the results. The City is to be commended for this important contribution to the West End neighbourhood. We are especially glad to see improvements proposed to the public bathroom feature.

Our organization also supports the move to establish a stewardship strategy for this plaza – as a test site and in advance of developing a similar strategy for other new and existing publically owned plaza areas in the city.

Over the past few years, the VPSN has had a chance to research a number of approaches to plaza stewardship – and while the models (and their application) vary, the point remains that a proactive plan for programming, maintenance and community involvement can play a key factor in the success of plazas and squares.

To this end, the VPSN is proud to be able to support the development of a larger stewardship strategy, and will contribute a minimum of $3,500 in-kind research and event planning to help with the development of this strategy in 2016.

The last point we wish to raise today is with regard to a component of the staff recommendations that we do not support.

While there are several regulatory changes being contemplated that make sense, the present staff report recommends at least one change to the City’s Street and Traffic Bylaw that we feel is problematic.

In particular, staff are proposing a new regulation that would disallow being in a plaza (Jim Deva plaza, or any City Plaza) “after hours” (e.g. 11-6pm) – “except for the purposes of traversing” the space. The regulation comes with a proposed fine of $100 for anyone caught and charged with violating this section of the bylaw.

We recommend that this component of the proposed changes to the Street and Traffic bylaw be struck from the revisions. Not only is it at odds with the goal of open, inclusive public space, but it also runs counter to the spirit of some of the proposed “guiding principles” for Jim Deva plaza – e.g.

We understand that the likely concern relates to matters of noise and nuisance; however, these (and other relevant concerns) are already dealt with in existing regulations.

The net result is that the additional element of regulation will unduly penalize legitimate users of the new Jim Deva plaza, as well as other plazas that will be covered through the bylaw…

City Council heard from speakers on the various recommendations contained in the staff report. The design concept was approved – which we support – as were a number of other important measures (see minutes). However, while there was some discussion about the amendments to the Street and Traffic Bylaw, Council ultimately opted to approve a motion that instructs the Director of Legal Services

to prepare amendments to the Street and Traffic By-Law, the Health By-Law, and the Ticket Offences By-Law, generally in accordance with Appendix A of the Administrative Report dated December 4, 2015, entitled “Davie Village Public Space Improvements”, to regulate activity in Jim Deva Plaza.

While we are disappointed with this decision, we understand that there will still be an opportunity to make the case about the particular aspects of the amendment that we are concerned about. We will be posting more on this in early 2016.