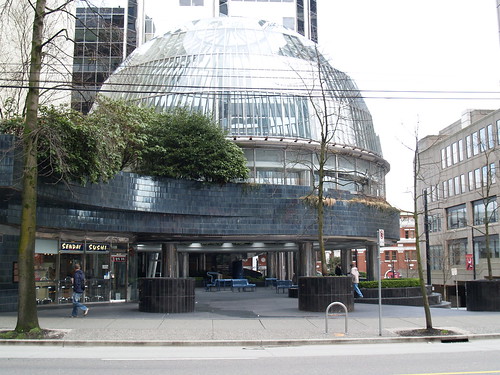 Description: A mixture of open-space and covered public space. The site is primarily defined by a heavy, domed structure – open at ground level. The site offers one of the few weatherproof public spaces in downtown. A significant change in grade exists between north and south ends of the site – necessitating a sizeable flight of stairs at then north end.

History Notes: The atrium/plaza was built in 1982, as part of the development of the adjascent Princess Building. In 2014, a proposal was submitted to the City of Vancouver to redevelop the building into a larger office tower. This rezoning was approved in 2015.

Locational Context: The atrium dome is located SE of the Princess Building, an 11-storey office tower. Surrounding context includes other office and retail uses. To the east: SFU’s downtown campus.

Security: Site has CCTV cameras inside.

General Usage or Observational data: The space is used informally, and in relatively low numbers. Often a spot for smokers, or people taking a break.