Inside Out: Getting ready for Laneway Living Rooms

This story has been updated.

Laneways and alleys take up a significant amount of land in Vancouver, yet remain one of our most under-utilized public assets. Only a handful of these spaces are welcoming for people today – but with a power wash and a little imagination, these spaces can become much more than places to store cars and garbage. Around the world, cities are waking up to the value of re-imagining these spaces as places for people. Vancouver is beginning to see their potential, too.

In the early 2000s, the City-led Country Lanes initiative added a substantial amount of greenery to three laneways. And, if you look hard enough, you can still find these permanent installations sprinkled around the city. From 2011 to 2014, the grassroots group Liveable Laneways created programming – from markets to fashion shows – fora series of these forgotten spaces. And last year, the City committed $100,000 to fund the long-term, large-scale transformation of three downtown laneways. The first transformation, Alley Oop, has already played host to a range of spirited events, and the second, Ackery’s Alley, is shaping up to be an equally exciting space. 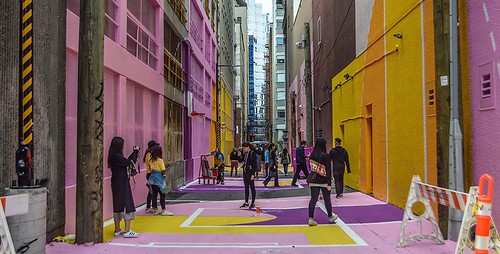 Building on these efforts, and with the support of a grant from Viva Vancouver, the VPSN is undertaking Laneway Living Rooms. This project will use a “lighter, quicker, cheaper” approach to transform two laneways this summer. Rather than relying on costly, permanent installations, VPSN will use materials like refurbished furniture, milk crates, pallets and a lot of flea market finds to realize the Laneway Living Room vision.

The intent of this tactical activation is to demonstrate the potential to rapidly transform unloved laneways into people-friendly places, at low cost. In doing so, our goal is to inspire neighbours and local businesses to undertake their own laneway projects and strengthen the notion that streets and laneways are valuable public spaces.

The concept of streets as places is particularly important in densifying cities like Vancouver. With more people living closer together, often in smaller spaces, the public realm is becoming – and needs to become – an extension of our living room. Playing with this notion, the Laneway Living Room project will take two traditionally private settings – the living room and the backyard – and make them public. In so doing, two under-utilized alleyways will become transformed into inviting places to linger, hangout, and have a little fun. 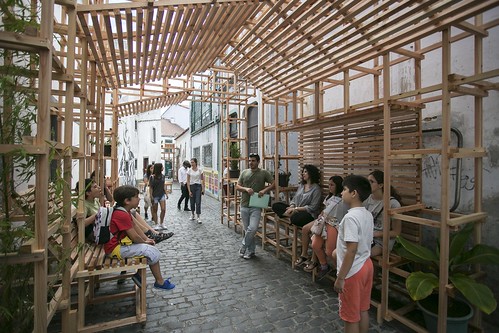 Grandma’s Living Room, planned for July 29th, will create a cozy space in East Van complete with tea and cookies, doilies and a range of items that will mix nostalgia, kitsch and a whole lot of upcyled inventiveness. A month later, on August 26th, the VPSN will roll out the green (astro turf) carpet as another alley is transformed into a Backyard BBQ – proving that that the backyard isn’t solely a product of the single-family home.

This summer, Vancouver’s laneways will come to life. Join us in rethinking what we consider public and private, and become part of a growing movement that is tapping into this under-appreciated public resource. Vancouverites deserve more from their laneways, let’s make it happen.

UPDATE: Since this story was first published, we’ve made a few changes to the program. The date for our first laneway activation will be Saturday, July 29 – not July 22 as was originally planned. We’ve also decided to kick things off with Grandma’s Living Room, and then hold the Bacyard BBQ event for our August date. These details have been updated throughout the story.

Want to lend a hand with the Laneway Living Room project? Contact our volunteer coordinator Michelle Pollard at volunteer@vancouverpublicspace.ca