Cordova Street, 1886, with the names of businesses marked on the image.

Happy Vancouver Day everyone! It was on this day, in 1886, that the City of Vancouver was officially incorporated.

Of course, dates like this need to be unpacked a bit. The area currently called Vancouver has been home to three First Nations – Musqueam, Squamish, and Tsleil-Waututh – since time out of mind. We mark the 135 years associated with the colonial city by adding a “+” to its years.

At the time of incorporation, the ‘new’ city was just a few formal platted blocks around Gastown – though the official boundaries went as far east as the Hastings Townsite (presently Nanaimo Street), south to an area now demarcated by 15th and 16th Avenues, and west to Alma Street.

There’s not many pictures from the time of incorporation, and much of the city that actually existed in April 1886 was burnt to the ground a few months later. But for a glimpse of how things looked 135 years ago, there’s some neat photos to be found in the archives.

The cover photo of this post is a view from the Hastings sawmill (located at the foot of Dunlevy) looking north-west and showing plank sidewalks to Gastown. (Fun fact: when the mill closed in 1930, the old Hastings Mill store – the oldest building in the city – was floated on a barge to the foot of Alma Street, where it was transformed into the Hastings Mill museum).

As the new city expanded south and westward, land was cleared at a rapid pace. Here’s the intersection of present day Granville and Hastings: 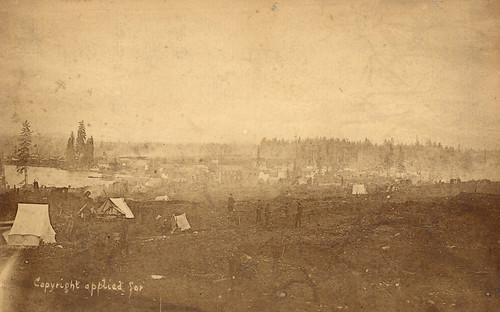 If you happened to find yourself out on Burrard Inlet, looking south towards Vancouver, this is what you would have seen: 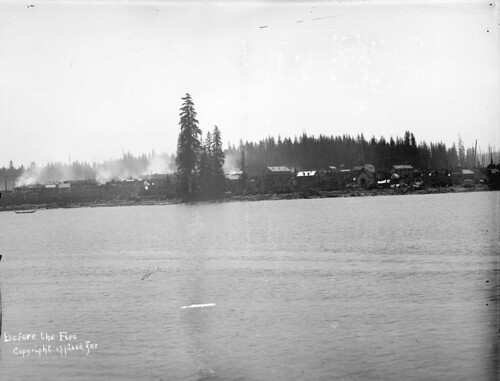 Turn the other way towards North Vancouver, and you would be looking at Eslhá7an – a Squamish village site (Mission Village). 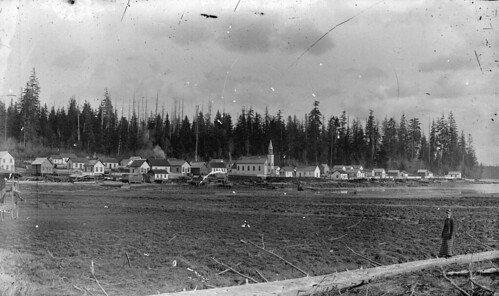 After the great fire, in June of 1886, the existing city was rebuilt at a rapid pace. This photo of Cordova Street, taken shortly after the fire, shows the new construction – with businesses marked on the image: 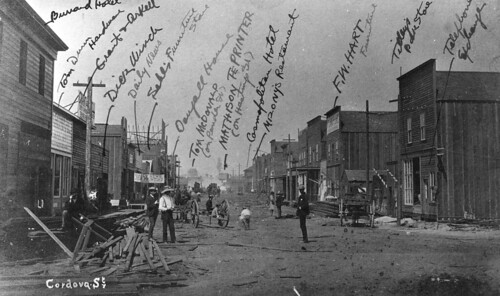 You can find more images from 1886 on our Flickr site.