It’s been a few weeks since our last update on the Life Between Umbrellas design competition for rain-friendly public space and lots has happened in the intervening period.

After the competition closed at the end of April, the competition jury met several times to review the 100+ entries we received. These were long meetings, with lots of tough decisions – a testament to the many excellent ideas that entrants submitted. (No surprise: there’s a wealth of creative thinking out there about how we, as a city, might collectively make our public spaces better in the rainy months!)

After many hours of deliberation, the jury selected a series of short-listed entries. These design ideas are now part of our People’s Choice voting process – and we’re looking for your help to award prizes in three different categories. There are so many excellent ideas that were submitted, and we want to hear which ones you think should be the winner!

Another bit of good news during this stretch: we had initially only intended to have People’s Choice voting in our Stream 1 (The Place) adult and youth categories, but following a recommendation from the jury, have now added additional People’s Choice prizes in Stream 2. That means there are a total of three different voting opportunities – featuring a total of 26 short-listed entries – on which you can cast a ballot. 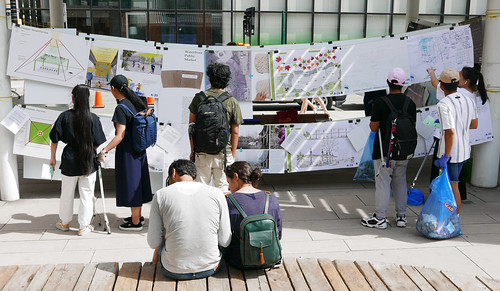 And so… after a few smaller “test” events, we’d like to take this opportunity to issue the first of a few invitations to our People’s Choice voting events.

Over the next few weeks we’ll be holding a series of pop-up voting events around the city. Each event, weather permitting, will typically last a couple of hours. We’re kicking off the first of three initial events tonight:

We’ll also be adding more events over the next few days, so stay tuned for details on those.

Voting events are in-person only – so you can have a chance to see all the entries in all their large format glory, while meeting other public space enthusiasts in the process.

Following that, we will be having our final wrap event on the week of July 15. (Details to follow, but mark your calendar).

Life Between Umbrellas is a co-production of the Vancouver Public Space Network and Viva Vancouver.