UPDATE (January 31): Good news! City Council voted to proceed with an engagement process that looked at the centre boulavard and “options for a safe and accessible path for all ages and abilities on the west or east side of the bridge.” You can read the Council minutes here.

This week, on January 30, City Council will meet to deliberate on a number of important public space items, including the future of Robson Square, and the proposed extension of the Broadway Subway to UBC. A third, and equally important discussion will take place on the proposed Granville Bridge Greenway – a concept that was first discussed as part of the City’s Transportation 2040 Plan (approved in 2012). The draft concept, as illustrated in the plan, calls for the transformation of two or more middle lanes into a centre-lane boulevard to be used for walking and biking. 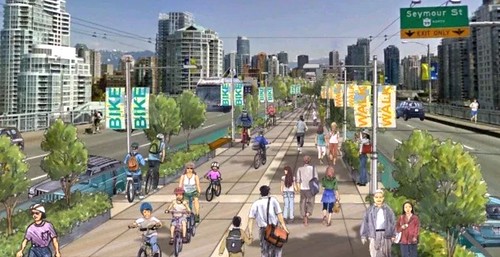 It’s an interesting idea, and one that we continue to feel is worthy of further exploration; however, we are hopeful that it will be possible to study a range of options regarding the best way to enhance active transportation and public space opportunities on the bridge.

City Council is being asked to review the proposed engagement plan. We wrote to offer our support, but asked that they consider the pros and cons of different options as part of the conversation with the public.

The following is an excerpt of our letter:

We are writing to offer our support for the proposed public engagement and design work for the Granville Bridge Connector. The vision as it has been presented thus far is in keeping with the City’s work to date in creating a city supportive of travel by sustainable and active means, as well as ensuring safe, comfortable and universally accessible infrastructure for city residents and visitors traveling to the downtown peninsula.

Reallocating the existing vehicle lanes has the effect of “right-sizing” our infrastructure to ensure vibrant, people-centric (rather than car-centric) neighbourhoods and business areas. This project would use the opportunity of the seismic upgrade on the bridge to move us towards a Vancouver that is healthy, socially inclusive and climate resilient. It is also consistent with the goals of Transportation 2040, of ensuring our infrastructure maintains the number of trips made by vehicles at stable levels, while ensuring people are able to access destinations as the city and region grows population and employment.

We do note that the vision of the centre greenway running between lanes of traffic is a prominent departure from existing walking, wheeling and cycling experiences of other bridges in Vancouver. There is understandable concern about the loss of access to views, the different relationship to moving vehicle traffic, and how connecting to and from the greenway from the street networks, safely and directly on both sides, will work. We urge you to direct staff, as part of their stakeholder engagement, to continue to explore and assess potential greenway alignments that follow the pattern established on existing bridges and to provide a breakdown of the constraints and tradeoffs from the investigations of these options. Ensuring that the experience of the greenway is “legible” and consistent with other bridges may contribute significantly towards preventing confusion or unintentional misuse, reduce reliance on written guidance or signage, and enhance predictability and (potentially) safety.

We do also see the Granville Street Greenway as an unprecedented public space and design opportunity in the city. Depending on the design, the Greenway could become a unique destination in its own right, and an active travel experience to connect with other existing assets such as the Seawall, the future Arbutus Greenway, and (potentially) Granville Island. It would also serve as a long overdue connection for people using mobility devices and all vulnerable road users unable to cope with the large curbs and unsafe conditions (due to the lack of physical separation from motorized traffic) on the existing bridge.

We would strongly recommend that public engagement efforts and design processes for this facility fully address the following:

The design of the greenway also hinges on the number of lanes re-allocated from vehicle space to the greenway. We further encourage you to direct staff to ensure the greenway is a public space that addresses a number of other needs related to “all ages and abilities” travel, such as seating to accommodate physical limits, or shelters, to acknowledge comfort when travelling in inclement weather. Making the greenway attractive and enjoyable by incorporating opportunities for play or programming might also go a long way towards encouraging and celebrating active travel. We see this as a necessary and important objective in building gathering spaces for adjacent communities, as well as in supporting transitioning away from travel by single occupancy vehicles.