Parklets For People: Reconsidering the Parking Space as a Small Urban Park

In the 20th century, we built cities around a grid of car-accessible spaces. When roads were planned, on-street parking was incorporated into the outside lane, offering parking in close proximity to businesses, homes, and services. It was widely assumed that generous parking would encourage people to visit a business partly due to the convenience of free or easy-to-find parking nearby.

As society progressed into the 21st century, the car began to lose its stronghold on the reign of transportation modes. In Vancouver, 50% of trips are now made by transit, by foot, or by bike. With this shift in transportation modes in mind, is it reasonable to expect that the abundance of space once reserved for storing cars be preserved for parking in the future? And, if we were to reconsider how to use this land space, how can we use it to benefit the community in which it exists?

In 2005, three urban designers at a firm called Rebar in San Francisco considered exactly that. They viewed on-street parking as an under-appreciated land use type and aimed to conceptualize a new use for it. One immediate benefit: on-street parking was essentially cheap real-estate, available to rent by the hour for literal pocket change.

So one day in late September, they found an underused block lined with on-street parking, covered a parking space with temporary grass, added a potted tree and a bench, and plugged the meter for a few hours – thus creating a temporary park in what was traditionally a parking space. As the designers stood back to observe their experiment in place-making, it wasn’t long before people began to use the bench and enjoy the space, similar to how a park would be used. 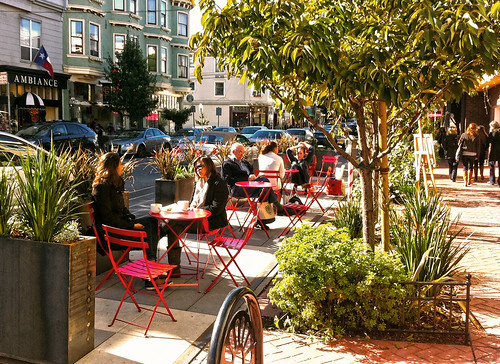 This led to the birth of Park(ing) Day, which soon became a global experiment in repurposing parking spaces for more public purposes. The one-day event has been held every year in late September, and has spawned hundreds of creative placemaking activations in cities around the world – including several in Vancouver starting in 2008.

But if Park(ing) Day is about temporary interventions, then perhaps a larger outcome of this idea of utilizing parking spaces for something other than parking is the birth of the parklet. Here, parking spaces are transformed into a more permanent extension of sidewalk space.

Much like Park(ing) Day, the parklet also has its birthplace in San Francisco. And also like Park(ing) Day, the initiative has grown and spread worldwide. Since they launched their first parklet in 2008 (with the help of Rebar), the City of San Francisco has expanded their parklet program to over 50 spaces throughout the city, offering miniature park-like spaces to people in places where there is a need for more and better public space.

Vancouver Recognizes the Benefits of Parklets For People

Vancouver has embraced the parklet concept, and, since 2011, has introduced 11 in locations around the city. Three of these are new this year, and one was removed owing to maintenance issues. (Find a complete list here).

Parklets are often found in proximity to busy coffee shops, ice cream parlours, and restaurants. A benefit to parklets is that they can add seating off the sidewalk, keeping the pathway clear in areas that often see high pedestrian volumes. Importantly, unlike the new sidewalk patios that are also being introduced, parklets are meant to be accessible by everyone – not just the patrons of the nearby business.

The first parklet, Parallel Park, was located in front of two busy coffee shops at Main and 14th Streets, and has been so well loved, that it is currently being refurbished and upgraded into a full public plaza. Further south on Main Street, the French Quarter Parklet was a collaborative project between local businesses, property owners, a design agency, and a construction company. The vision of this parklet was to create a space that brings neighbours together, while at the same time being a community-building project that had input from the wide range of people who would use it. Downtown, on Robson Street – a busy pedestrian and retail corridor – the Urban Pasture Parklet can be found in front of Café Crepe, providing an urban garden setting with bench seating and tall grass in planters. Another Robson parklet – in front of Japadog – is just opening, while several others can be found – on Fraser Street, Commercial Drive, and West 4th Ave… and shortly also on Davie Street. 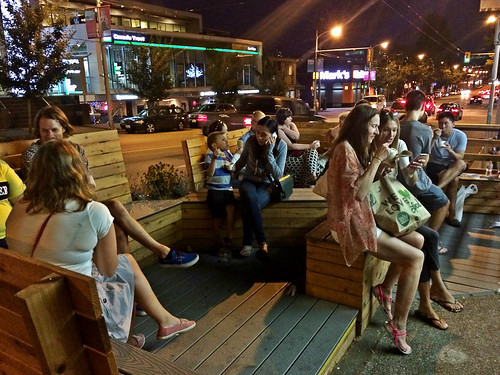 Parklets Fill a Need In Their Community

Local designer Luc Bagneres has been following the evolution of parklets and is currently writing his masters thesis on the subject. In addition to researching this new type of public space, he is also collaborating with two local enterprises – DUDOC and Earnest Ice Cream – on a proposed parklet that they hope to see installed in front of the Earnest ice cream parlour in East Vancouver.

According to Bagneres, it is imperative that parklets be built with the intention of filling a neighbourhood need. And in filling the need, one must first know the neighbourhood, the people who live there, and the businesses in the area.

For example, does a neighbourhood lack green space, ample seating, or bike parking? Is pedestrian flow along a sidewalk hindered due to people congregating outside a popular business? Is there potential to offer space for an urban garden, a children’s play space, public art, or a cultural landmark? This sort of thinking is a good approach to the design of public space in general but especially so on these micro-spaces. A parklet, properly planned and placed in the right location, can fill many of these needs in a simple, and relatively cost-effective fashion.

The City of Vancouver supports the development and implementation of parklets by reviewing designs and assessing transportation-related impacts. Parklet designs are guided by their Parklet Design and Construction Manual – and a successful proposal must respond to considerations related to location, platform height, construction, accessibility, and seating. Beyond the technical considerations, parklet designs must also have community support, be insurable, and be independently funded.

Within these parameters, the opportunity to customize a parklet to complement the look and feel of a neighbourhood has a wide latitude of possibility through materials (they can be fabricated with wood, concrete, or tiles, as long as the platform surface remains flush with the adjoining sidewalks), configuration (they can be terraced or flat), and amenities (which can include different types of seating, lighting, canopies for shade or rain protection, and landscaping).

Like any construction project that requires City approval, the application and permitting process can take some time. At present, the processing of applications is estimated to take 8-12 months, depending on the comprehensiveness and suitability of the design proposal. For better or for worse, this sort of timeline ensures that only the most dedicated of teams applying for a parklet permit remain invested in seeing the project through to completion. But as the popularity of parklets continues to grow, it seems reasonable to ask whether or not there are ways to streamline the review and approval process. 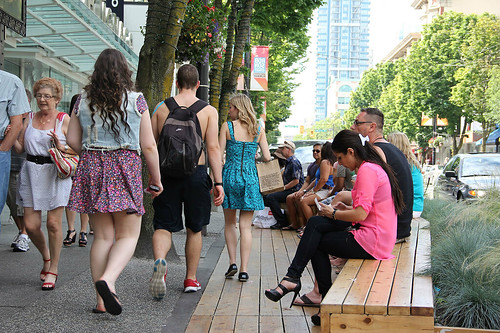 While parklets create a benefit in adding more public space to neighbourhoods, the response is not always 100% positive. Feedback has generally been good in Vancouver, but some cities have seen a more active debate about the pros and cons of parklets.

Chief among the concerns are the loss of parking, increased public lingering, the potential encampment of homeless individuals, illegal activity, and general late-night rowdiness. There have also been concerns from urbanists about the quality of design. The degree to which these are significant or not is often a matter of perspective – but suffice to say, city officials hear from both sides on the matter. On that note, municipalities sometimes also expressed challenges with parklets, as they can be more cumbersome for engineering departments to work around. This is one of the reasons that parklet designs will usually include a solution for easy transportation and removal from the site, when required.

At least some of these concerns may be dispelled as people quantify the benefits that come with these types of interventions. For example, one study out of Chicago showed that neighbourhood parklets increased foot traffic to any area by up to 80%. This foot traffic, in turn, brought an with it an increase in revenue, with food and beverage providers nearby seeing an increase in sales by 10-20%. Other studies have shown that pedestrians and cyclists tend to spend more in one month on small expenses than drivers do – suggesting that amenities like parklets can encourage pedestrians and cyclists to visit a place, linger, and to spend money when they do.

Reconsidering parking spaces as small urban parks offers a community more room for people to meet, congregate, experience, and enjoy their city. As the preference for active transportation grows and car usage declines in many cities, let’s envision more people-friendly purposes for parking spaces. With any luck, the transformation of idle road space and private car storage into vibrant people-places will become a legacy of the 21st century.

Jada Natalie Stevens is an urbanite and designer who is motivated in exploring how our personal actions can contribute to a better urban society.