Art Phillips Park: a small space in a pivotal location

In the heart of Vancouver’s financial district there is a triangle shaped park were a set of steps lead down into a lush terraced garden. Grassy areas, bordered by benches, invite office workers to escape their cubicles and enjoy lunch outdoors. In the springtime, a line of Akebono cherry trees blossom in a celebration of pink, their petals raining down on people below.

The park, named after former Mayor Art Phillips, is also home (or rather, technically adjacent to) Burrard SkyTrain Station, a bustling transit hub which connects commuters to the rest of the city by bus and rapid transit. Two urban shopping centres converge at the park’s central concourse, at the same place where ferns and a fountain bring tranquility two stories below street level. And while the park is surrounded by towering high-rises, much of the space is sheltered from their looming presence by a glass canopy structure that provides a post-modern take on a Victorian-era railway station house. Visited by thousands of people a day, this unique park in the centre of the city is an important link to green space, transit and commerce. Yet, despite its prominence, the park has an understated feel. For many people, it is more a space to be traversed, than one in which to linger. 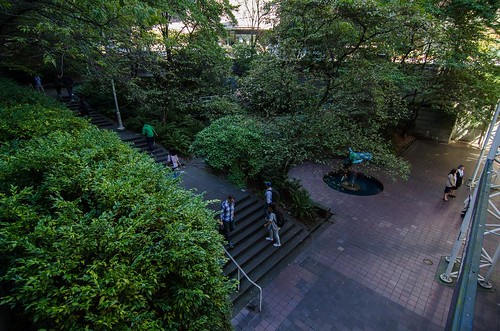 The steps down to Burrard Station.

The trains under Burrard Station funnel travellers via an underground tunnel running parallel to Dunsmuir Street. Prior to the rapid transit station opening in 1985, the same rail tunnel was operated by Canadian Pacific Railway to carry freight from False Creek to Waterfront Station. A BowMac Cadillac Dealership inhabited the tarmac where the Station sits today. (It might be hard to believe today, but this part of downtown used to be car dealership central, with more than a dozen car dealerships stretching along Burrard and West Georgia Streets. But as is common in Vancouver lore, by the late 1960s real estate prices in the downtown core soared and most of the land was sold to developers who built the office towers that exist today.)

In the mid-1970s, Mayor Phillips had the foresight to save this parcel of land from development and use it for park space and future rapid transit. That Phillips was able to plan a park with future rapid transit a full decade before the first SkyTrain ever left the station gives an indication of his politics. He was an early champion of liveable cities, and is also credited with reintroducing housing in the downtown core, transforming south False Creek into a residential area, and, perhaps most notably, being a key political voice that helped halt the expressway that was intended to cut through Strathcona and Chinatown. The little park at Burrard, originally named Discovery Park was renamed to honour the then-former Mayor upon his death in 2013. 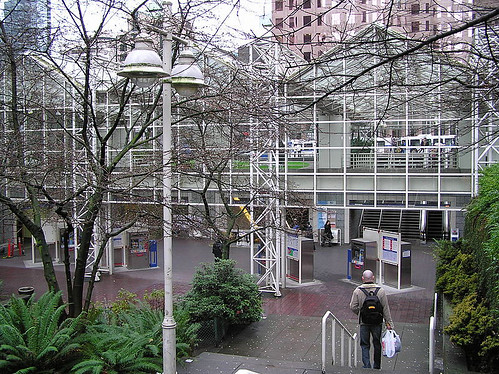 View east from Art Phillips Park to the rear entrance of Burrard Station.

Civic historian John Atkin recently suggested that urban parks could be “smaller, tighter, weirder, ruins of the city.” Art Phillips Park encompasses elements of all of these things. The fact that this small urban park, with its layers of history, imported cherry trees, public art, mass transportation, hungry office workers, flocks of pigeons and hurried commuters, can offer such a slice of Vancouverism in such a dense space, proves that vibrant, multi-use public spaces are an essential component of a healthy urban life.
Jada Stevens lives in downtown Vancouver and can often be found exploring the city’s public spaces, riding transit, or drinking flat whites in trendy Gastown coffee shops.