Updated. Some exciting news that’s hot off the press! The Vancouver Art Gallery North Plaza (aka Courthouse Square, Centennial Square) officially reopened this morning. The lengthy planning and design process began in 2013, resulting in an approved design in 2015. Now, after more than a year of construction (including much-needed repairs to the Art Gallery storage vaults under the plaza) the plaza is once again ready for use. (And not a scrap of bark mulch in sight!). The plaza will be available for various events over the course of the summer – including the Jazz Fest, Canada Day, and Thai Fest – but will remain closed for day-to-day visits until some remaining work is completed.

The renewed square looks great, and we will be interested to see how the space is used – both formally for events, and informally, for everyday activities or a more casual nature. It’s a large plaza with some interesting design challenges – including a northerly orientation, and busy arterial streets on three sides. It will be intriguing to see what sorts of anticipated – and unanticipated – activities take place in this renewed square. One thing is for certain: the redesign is an improvement on where things were at just a few years ago. 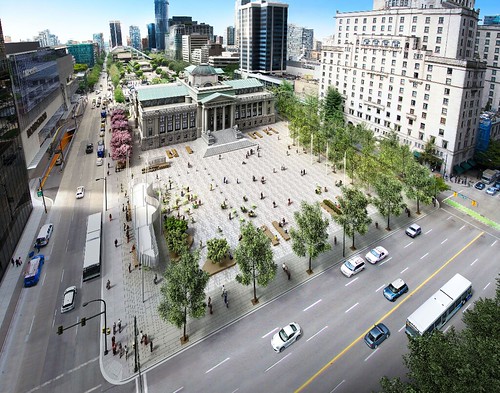 Up next, the 800-block of Robson… the North Plaza’s more intimate counterpart. The redesign of this plaza started last year after Council voted to permanently pedestrianize the block. A design concept was presented to Council in December, and work is expected to begin in the not too distant future.

In the meantime, check out the new North Plaza and let us know what you think. Good public spaces always take on a life of their own – so pop by and tell us what you see going on there!

Here’s the media release from the City of Vancouver:

Upgrades to the North Plaza of the Vancouver Art Gallery are completing this week in time for the Jazz Festival on Saturday.

“The plaza to the north of the Vancouver Art Gallery is host to Vancouver’s most significant events and is a popular place for people to pass through, sit and relax, and meet one another,” says Paul Mochrie, Deputy City Manager for the City of Vancouver. “We at the City have the honour of maintaining this remarkable public gathering space, and we are excited to see how it will be used going forward.”

The new plaza complements Robson Square on the other side of the Art Gallery and the surrounding heritage buildings. The new fully accessible space enhances safety for large gatherings, improves flexibility for events and day to day use.

The plaza redesign was led by Nick Milkovich Architects, HAPA Collaborative , and Matthew Soules Architecture, and construction was completed by Jacobs Brothers contractor.

Correction: An earlier version of this post quoted a City Media release that incorrectly referred to Hapa Collaborative as Hapa Collective. Further, the post suggested that the plaza was fully-reopened. Rather, it is being utilized for various events throughout the summer, but is still closed to everyday use while the remaining work is completed. Additional clarifying text was added around the potential usage of the site.