Vignettes of mid block connections along the seawall: Blurring edges and creating connections

Summer-like weather this past weekend enticed me to leisurely bike around Vancouver’s False Creek, along with thousands of fellow urbanites congregating there for sunshine and public life. As is often the case with my urban explorations, I was reminded how strolling and biking along the Seawall allows one to experience our city’s preeminent public space as a series of connected parks, plazas, pathways and buildings narrated sequentially in the direction of one’s chosen or desired path. This experiential nature of urban environments is what urban design theorist Gordon Cullen termed ‘serial vision’. In his seminal 1961 book Townscape, Cullen expressed that to the pedestrian, “the scenery of towns is often revealed in a series of jerks or revelations” (p.9). 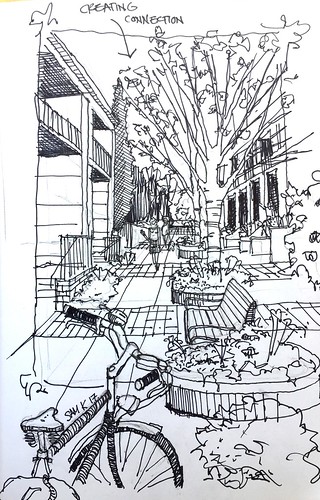 This time around, equipped with my sketchbook and inspired by Cullen, I wanted to meander away from the central spine of the Seawall and explore its more hidden spaces along the way. There are a number of ‘mid block connections’ within the residential developments along False Creek that play an interesting functional and experiential role within the larger public realm system of the area. I sketched a series of vignettes as reflections on the contributions that these more narrow and semi-public spaces make in completing the spectrum of spaces provided within the area’s public realm. 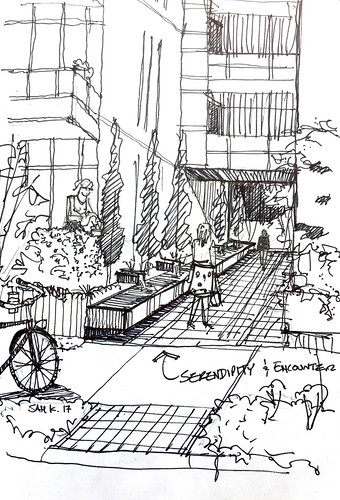 Functionally, these spaces provide increased connectivity for people walking and cycling. They provide subtle apertures for people wanting to make their way to the water’s edge or back towards the city. Their narrow, intimate scale and tree canopy provide shade and comfort, particularly in hot summer months. Finally, they break the more predictable rhythm of the Seawall (and Vancouver’s prevailing grid), creating serendipity and potential for more intimate chance encounters. By softening the private/public edge condition and permeating the public realm through private developments, they create spaces for interaction and hospitality. These spaces are intriguing in the way that they often blur the boundary between private and public space. They are often undefined and malleable – and their secondary role as public spaces means they can be at times both easily overlooked, and often rigidly regulated by strata corporations and property mangers.

To my mind, the potential of these mid-block connections is only fully realized with the appropriate constellation of well-placed, well-scaled buildings and inviting ground-level activation – such as patios, soft and hard landscape features – and community use. These sorts of elements help to shape these liner passageways and ultimately an active albeit informal participation of people bring these unique spaces to life. 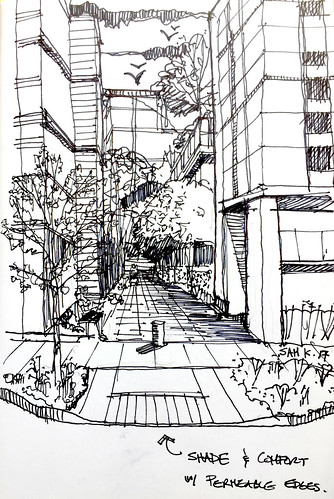 Cullen captures this potential more generally by stating, “a city is more than the sum of its inhabitants. It has the power to generate a surplus of amenity, which is one reason why people like to live in communities rather than in isolation…bring people together and they create a collective surplus of enjoyment; bring buildings together and collectively they can give visual pleasure which none can give separately” (p.7).

These mid block connections are a great example of such surplus amenity in the context of their surroundings, with potential for pleasure and enjoyment particularly if more artfully and actively utilized for sociability and public life. To this end, perhaps the hallmark of a good space is probably when it gets used for spontaneous activities that were never anticipated by the designers and architects who built the space. Imagine my happiness when, returning to my home after sketching a few of these places, I saw a couple holding a garage sale in one of these spaces while engaging with their neighbours. A perfect summertime activity in this intriguing public space.