Public art around us: Douglas Coupland’s Golden Tree as celebration and warning

One of Vancouver’s most recognized cultural names has created a very shiny, bold piece of public art relating to B.C.’s old-growth forests.

As a Vancouverite, I instantly recognized Golden Tree by Douglas Coupland as a replica of the iconic Stanley Park Hollow Tree: an unreal presentation of something very real in the city’s history. Unveiled in July 2016 at the corner of Cambie and Southeast Marine, across from the Marine Drive Canada Line station, the piece was commissioned by Intracorp as its public art contribution for its MC² condo development. A 32,000-pound, 43-foot, steel-reinforced resin, fiberglass structure encased in gold finish, it took more than 6,000 hours to fabricate, to a budget of approximately $440,000.

Our forests, our art

Our province owes a significant amount of its wealth and fame to its coastal rainforest and to its centuries of forest production. For thousands of years, First Nations have used the forests for their homes, transportation, food, culture and wellbeing. Vancouverites and tourists alike spend plenty of time and effort to experience the North Shore Mountains. Our natural surroundings are a popular theme in local public art as part of the conversation on environment, history and Canadian identity.

One of Vancouver’s most familiar trees, Stanley Park’s Hollow Tree has a storied history. It’s been visited and photographed by thousands, posing inside and around it. When I was growing up, my grandparents had a photo, circa 1930s, showing them proudly sitting in a convertible with its back end inside the 800–1,000-year-old western red cedar. 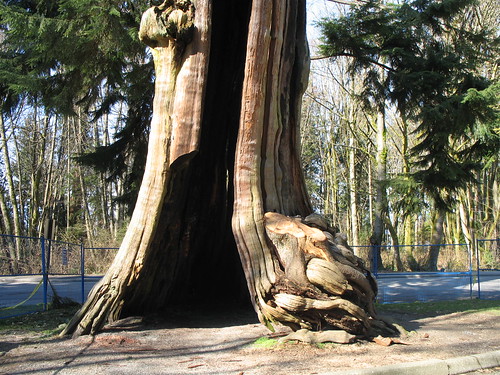 The Hollow Tree in 2008. Photo: tree-species under Creative Commons

The Hollow Tree died naturally many years ago, and in 2006 the remaining stump endured considerable damage during a storm, as well as a mysterious fire in 2014. After the fire, the stump was slated for removal; however, after public outcry, the Hollow Tree Conservation Society raised hundreds of thousands of dollars to restore and stabilize it with cables.

Many cultures equate gold with wealth, power, permanence and growth. By replicating the Hollow Tree in gold paint, Coupland attaches those perceptions of material worth and endurance to a threatened piece of natural beauty. Golden Tree represents the millions of dollars that B.C. companies have made from forestry as a backbone of our province’s wealth. The sculpture signals our economic dependence on natural resources, presently figuring in B.C.’s high-profile dispute with the Trump administration over softwood lumber.

The Golden Tree’s location in south Vancouver’s emerging Cambie Corridor neighbourhood can be seen in complete opposition to the real tree’s location in Stanley Park. South Cambie is rapidly growing, with large parcels of land being bought and redeveloped into denser housing. Greenspaces are disappearing, while Stanley Park remains Vancouver’s most cherished and protected urban forest. Encountering this new version of one of the city’s oldest symbols in one of our newest developing neighbourhoods juxtaposes Vancouver’s image as a sustainable and green city alongside its financially driven side. The Hollow Tree represents old Vancouver, while the Golden Tree is the expensive, cosmopolitan and sexy present-day Vancouver.

Coupland prompts us to consider Vancouver’s relationship with the landscape and how the city’s rapid development has altered it. I understand Golden Tree, within its physical and historical context, as a warning to protect and cherish our environment. If we don’t change our ways, we may find that all that remains are a few golden trophies to remind us of what we’ve lost.