Vancouver announces strategy for the future of downtown public space

In an effort to address the absence of a comprehensive approach regarding our public spaces in Vancouver, the City has announced the Downtown Places and Spaces Strategy. This follows on VIVA Vancouver, the program behind public space initiatives like Robson Redux and the Parklet Program, whereby private businesses sponsor public seating areas outside storefronts. The new strategy will help the City determine what kind of spaces are needed in our downtown while providing a framework for prioritizing and coordinating their delivery. The strategy currently only covers neighbourhoods on the downtown peninsula, but the Downtown Eastside, False Creek Flats and the communities south of False Creek will be included in future phases.

The strategy will seek opportunities for the creation of public spaces on both publicly and privately owned land, specifically looking at street rights-of-way, including plazas, sidewalks, parklets, laneways and the spaces in front of retail and office buildings. A more concerted effort to activate downtown’s open spaces will address the concern that increased density and redevelopment in Vancouver are resulting in a loss of public space. Many office and retail buildings provide welcoming spaces through the provision of pedestrian shelter, patios and plazas. In recognition of this, the strategy will find ways to retain and encourage these privately owned public spaces. 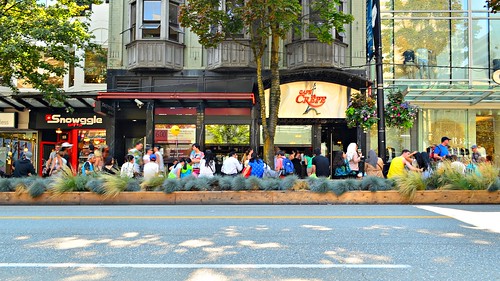 Part of the process will be an inventory of current public spaces in the city and how these spaces are being used. The Standing Committee of Council on Policy and Strategic Priorities recommended that the work of the Vancouver Public Space Network be acknowledged in this regard and that the strategy be informed by the knowledge and data already gathered. A “public space and public life” study, to be conducted this summer, will help the city collect data while engaging Vancouverites in the planning of the strategy. The public can also expect the implementation of pilot projects throughout the downtown in order to test ideas and provide “action while planning.”

Right now, the City is offering a funding opportunity for pop-up projects that will help activate and reimagine public spaces. An applicant can apply for up to $5,000 to implement an idea. Proposed projects must be:

As part of their pop-ups, successful applicants will be asked to include in their projects a short survey for the public. Feedback from this survey will help the City gather input on future public space initiatives.

For more details and to apply, visit the City’s website here. Applications are due by 5 PM on April 28, 2017.

All photos by Creative Commons license