A Canadian take on parks: Park People’s Heart of the City conference

Last month featured a new type of event: the Heart of the City conference, Canada’s first national conference on urban parks. Organized by Toronto’s Park People, the event brought together advocates from across 10 provinces to discuss the past, present and future of parks across the country.

Representing the VPSN, I numbered among 100 delegates representing the interests of people and parks, including multiple nonprofit advocates for public space. I often found myself next to community organizers, urban farming champions, landscape architects, city politicians and a vast array of other attendees who all had parks in common. This strong diversity of background enriched both the program and the discussions held in the unplanned spaces in between. In many ways, the spontaneity of connection that the conference fostered was exactly the ambition of a well-designed park: it created a community out of strangers.

Themes of community, placemaking and inclusion were strong throughout the conference and formed the focus of the presentation given by panelist Sabina Ali, co-founder of the Thorncliffe Park Women’s Committee (TPWC). Through the work of Ali and TPWC, Thorncliffe Park evolved from a dejected-seeming, underutilized green space to a vibrant place that, through events like the Winter Carnival, resident-led arts programs, markets and bazaars, actively works to counter the social isolation often faced by new immigrants (particularly women). 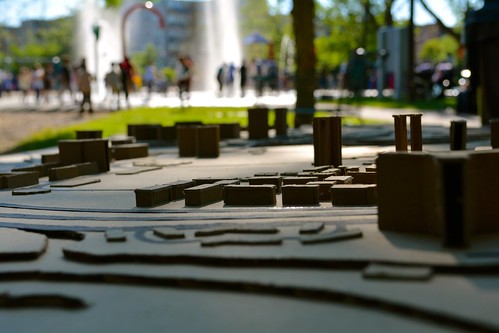 This type of grassroots, community-led change was the topic of several discussions led by panelists, including Caroline Magar, development coordinator of Les Amis du Champ des Possibles. A landscape architect, Magar along with other Mile End residents was instrumental in convincing the City of Montreal to rezone into a park a parcel of greenspace that, while contaminated and previously industrial, was particularly well-loved. In recognizing the potential of Le Champ des Possibles to increase urban biodiversity, Les Amis worked to design a new version of an urban park, based on the idea of novel ecosystems, and collaborated with local artists to create a field guide that grounded the space in its own ecological identity.

However, the fact that communities have the power to exclude, as well as include, was also touched upon. In the keynote, Jay Pitter engaged the room on this point, providing a variety of strategies for ensuring inclusive placemaking. She urged us to use a collective leadership model when creating public spaces and to challenge our geographical imagination, as it typically leaves out some people. While parks advocates are often dedicated and tireless, she mused, looking at the mostly white faces in the conference room, they are not necessarily diverse. By using a collective model (which decouples planning from any one particular group), we can create space for more diversity and ensure that the framework used for consultation and planning represents the population for which it aims to provide improvements.

Pitter also challenged attendees to acknowledge the violent histories that exist in our public spaces, a result of exclusion. These histories have prevented not just community-building, but also the ability of traditionally excluded groups to assert their rights to public space (both in design and in use). Ryan Gorrie acknowledged these histories in his presentation on the Indigenous Placemaking Council (IPC), a group that specializes in indigenous placemaking, which the IPC sees as a process of reconciliation. Through a co-design process, the IPC works with traditionally marginalized communities, ensuring that they can see themselves reflected both in the design framework and in the end product. Through this, the IPC hopes to correct a reality that often denies visibility to First Nations culture in public spaces, despite indigenous presence on this land for thousands of years.

With the conference spanning two full days of packed programming, these summaries are really only a brief cross-section of the contents and touch lightly on the variety of topics broached. However, as interesting as all of the speeches and workshops were, the real highlight for me was being able to connect with parks advocates from across the nation. I hope the success of the event was enough to inspire its annual occurrence; indeed, the organizers have let us know that they’d like the conference to happen again in the future.

If you’d like to read more about the various conference delegates and the work they’re doing to improve parks in their cities, you can find the list here.

All photos under Creative Commons license