Digging deeper: Unearthing the facts of BC Hydro’s Seed initiative 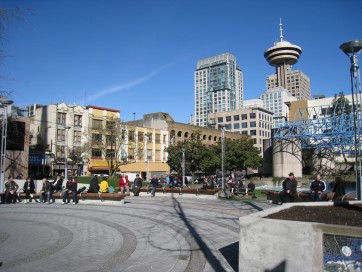 You may have heard of the BC Hydro Seed project, which proposed to redesign and enhance three open spaces in downtown Vancouver, in exchange for the opportunity to build underground substations.

Heralded as innovative by some and considered by others as being of uncertain scientific merit, Seed was a short-lived blip on our public space radar. On March 8, the City of Vancouver passed a motion to delay a decision on the controversial project, introducing a timeline that proved disagreeable to BC Hydro, which had hoped to receive the green light by March 31. The utility rescinded its proposal shortly thereafter.

Promoted as a solution to increased energy needs and scarce utilities space in Yaletown and the West End, Seed had proposed building one underground substation each at Emery Barnes Park and Nelson Park. The savings in property values that BC Hydro would have realized by building on City-owned property would then have been diverted to improving park land and providing public amenities in the form of a school, housing, and recreation facilities. Organized by the same firm that led the marketing and outreach campaign for the Site C dam on the Peace River, the consultation process spanned January and February, taking place in the form of four open houses, four small group discussions, two PAC meetings and an online survey. Incidentally, the consultation wrapped up one week after BC Hydro released a Stantec report on the impact of the plan, providing little time for respondents to incorporate the information from the report into their feedback.

Despite the whirlwind timeline, the proposal garnered a positive response from reporters at The Province and Metro Vancouver, with a more subdued one from the Vancouver Observer and News 1130. Amid the flashy BC Hydro consultation materials, it was difficult to see who would oppose a plan that would finance improved public space, a new school and a new daycare centre in the densest area of Vancouver. A little digging, however, shows how the downsides came to outweigh the upsides.

Though BC Hydro often cited the existing substation at Vancouver’s Cathedral Square as proof of the technology’s safety, the science on exposure to electromagnetic fields (EMFs) is very much unresolved, particularly where children are involved. A 2014 article published in the Journal of Biosciences and Medicines states that “There is … some epidemiological evidence that prolonged exposure to higher levels (more than 0.4 μT) of power frequency magnetic fields is associated with a risk of leukemia in children.” According to the U.K. government, “a number of studies” show “a possible link between exposure to magnetic fields in the home (and/or living close to high voltage power lines) and a small excess of childhood leukaemia,” though the studies aren’t conclusive as to cause. In his earlier (2003) book Biological Effects of Electromagnetic Fields, P. Stavroulakis cites evidence that rates of childhood cancer are 2.7 times greater when kids are continuously exposed to levels above 0.3 μT. He goes on to reference a 1995 study funded by the Environmental Protection Agency that suggests that “daycare centres should not be built in areas where exposure exceeds 0.2 μT,” because of increased health risks. In fact, EMF measurements taken at Cathedral Square Park have ranged from 0.2 μT to 10 μT.

In response to the Seed proposal, the Vancouver Parks Board commissioned an independent environmental study that would delve deeper into the potential health effects of underground substations. This report, however, would not be published until one week prior to the March 31 deadline: a factor that may have contributed to the City’s motion to postpone a decision. (The report is still unpublished as of this writing.)

In addition to the potential health effects, the City was concerned with the factor of property values. Both Emery Barnes and Nelson parks are city-owned properties of considerable worth. To provide an idea of this value, 1290 Homer Street, three blocks from Emery Barnes and a small fraction of the size of either of the parks, was assessed a land value of $8,199,000 in 2016 (figure courtesy of Colliers International). Thus Seed promised to provide major cost savings to BC Hydro (which had requested a 99-year lease on both properties), the vast extent of which would likely not have been publicly reinvested. Indeed, the City’s requirement that BC Hydro pay a price based on the cost of buying the land outright reinforces this further as the reality (and was cited by BC Hydro as prohibitive to pursuing the project).

While an enticing proposition, the Seed proposal demanded many questions and offered few answers. The additional constraint of a tight three-month timeline made reaching a thoughtful decision all the more difficult. Overall, it certainly seems that the City’s decision to postpone a final say on the proposal (and to push it past the May election, which no doubt would have impacted provincial support in the event of a shift in government) was in the best interest of Vancouverites. The City’s further requirement that BC Hydro pay the City a price based on the cost of buying the land outright makes a revival of the proposal unlikely.

It’s conceivable, however, that a similar proposal might resurface in other municipalities, particularly where land is limited. Should this occur, it’s key to keep in mind the lessons our City has learned: pursue independent scientific investigations into EMF impact, weigh carefully the potential benefits against the value of owned land, and don’t be rushed by swift timelines.