Back on track: Vancouver resumes Arbutus Greenway construction and consultation

In October, we reported on Vancouver’s unprecedented rail-to-trail Arbutus Greenway project and on the VPSN’s advocacy for making the most of this corridor as a vital public amenity.

If you don’t know the greenway yet, have a look at this little video posted by the City, which includes clips filmed by a person biking the route before all the track got ripped out. It gives you an overview of the pathway’s course.

In detailed recommendations to the City, the VPSN has offered a variety of ideas with a view toward enhancing safety, community ambience, environmental sustainability and placemaking opportunities along the greenway, while evoking its railway heritage and preserving the gardens bordering it.

In the fall, the City indicated in conversations with me and others that the paving of the temporary pathway, including separations for cyclists and pedestrians, would complete by Christmas. Our unusually cold and snowy weather threw a wrench in that plan, keeping the pathway glaciated over several weeks. As a consequence, the greenway has remained paved only on certain stretches.

By now it’s all thawed again. On January 18, Mayor Gregor Robertson and the City’s chief engineer, Jerry Dobrovolny, held a press conference at the greenway’s intersection with 57th Avenue, announcing that paving would restart this week. In my own discussions with the City, I’ve received estimates that the paving should complete by March, along with the much-awaited separations for cyclists and pedestrians. These separations will be piloted in different ways along the path. On some stretches, painted lines will indicate lanes. Elsewhere, the City will create two different paths by cutting a physical strip through the centre of the pavement laid, with a third, mulched path included as well where width allows.

With this return to construction also resumes the citywide public consultation. According to the mayor, the City wants “big ideas” from the public on which design features and amenities to incorporate on a permanent basis.

In the VPSN’s view, there’s an urgent need to deal with the dangerous lack of clarity at major arterial crossings such as 12th, 33rd, 57th and others. Often no obvious crosswalk or other form of safe crossing exists where the greenway intersects the arterial road. 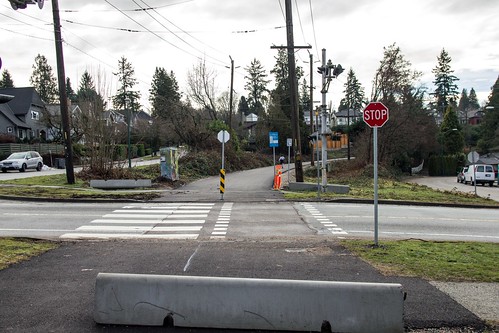 At 12th, for example, an outdated and redundant traffic signal stands at the former tracks that local drivers make a habit of overriding, leaving greenway users vulnerable. Currently, concrete barriers and some signage exist at arterial intersections, but changing drivers’ behaviour calls for more permanent and visible installations. Painted and/or raised crosswalks, obvious signals, paved slopes at sidewalks for cyclists and wheelchair users and more direct connectivity between the greenway and bike lanes would all help to create proper rights-of-way. 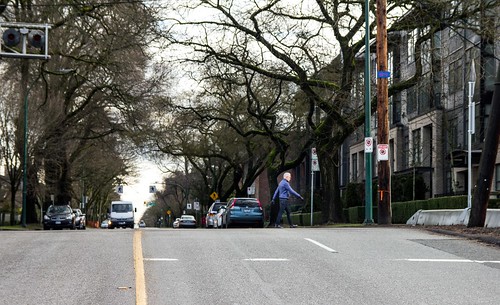 In conversations with the City, I’ve been told that designers are presently looking at options for improving the intersections and that solutions should be in place by the time the temporary pathway completes, but details are still vague at this point.

Another interesting issue has to do with the gardens lining the greenway. A gardener at one of the City-permitted sites has expressed the hope to me that clear separations will be created to protect produce from theft even as the gardens remain visible to the public. Perhaps low hedges might be a solution in some cases. It’s realistic to expect that the paving of the greenway will mean a rise in foot and cyclist traffic. As this flow increases, there’s a delicate balance to be drawn between allowing the public to appreciate the gardens while protecting the plots from destructive incursion. In the VPSN’s view, these tensions point to the need for a more comprehensive approach to stewardship over the pathway from now into the future.

There are so many ways you can get involved with this unprecedented opportunity to shape our city. What do you want the Arbutus Greenway to look like?

As communications coordinator and Arbutus Greenway project lead for the VPSN, I’ll be representing the Network at a stakeholder workshop hosted by the City on February 2. If you have any ideas or concerns you’d like me to raise, please contact me before then at naomi@vancouverpublicspace.ca.