December marked the third meeting between the Park Design and Stewardship Advisory groups, the City, the designer (James Corner Field Operations) and Modus, the firm chosen to drive community engagement. While the advisory groups had met jointly throughout much of the process, this meeting was the first in which they had been separated, leaving the park design group to connect on a more intimate level with the City, JCFO and Modus.

Prior to presentations from each, City of Vancouver senior urban designer Pat St. Michel provided a summary of emergent ideas relating both to the park and to Northeast False Creek as a whole. Among these were:

These ideas had become prominent in meetings involving both the advisory groups and a panel of experts recruited to provide a high-level critique of the project.

Rob Barrs from Modus followed, providing an in-depth explanation of the communication and engagement plan. The program will consist of three phases, and we’re currently in Phase 1, Emerging Area Plan Directions. Broader public engagement will continue to be conducted through a combination of public events, workshops, and expert and advisory panel discussions as well as information conveyed through news releases, web updates and social media. 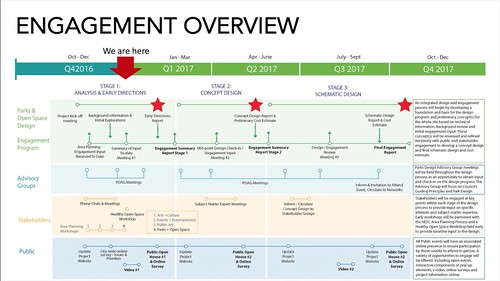 Among the most interesting tactics to date has been a Healthy Open Spaces workshop, which took place in mid-December (with a report to be issued in the near future). The workshop included the Vancouver Police Department, Park Board rangers, the PHS Community Services Society and the Vancouver Area Network of Drug Users, with additional attendees representing families and residents.

Having been involved in a number of consultations across the city, I was pleased to hear that this bold initiative would bring together seemingly disparate interests around a single table. Homelessness and use of public space by vulnerable populations, including those with addictions, is never far from any public planning discussion in Vancouver. The need for a strong social justice lens in planning for public space is critical – and my hope is that, through dialogue, we can collaborate on solutions to some of these bigger and more systemic public space considerations.

JCFO followed with a presentation and design studio, in which early ideas were introduced and priorities for the park pulled apart and prodded. Both advisory groups have repeatedly stressed the importance of a flexible open space suitable for passive play by those who may be walking through or observing, rather than participating in activity. However, achieving this goal may not be easy. Chief among the ambitions is the desire to ensure that the park is a “destination,” ready for large event programming in what is being described as a new entertainment district.

There is an inherent tension in the various roles and expectations that are being advanced around the park. Will the focus be on its role as a city-wide magnet for residents and tourists, and if so, how will it function as gathering place for neighbouring communities (particularly the Downtown Eastside and Chinatown)?

Regardless, key features such as showcasing Carrall Street as an historical (and pedestrian-friendly) artery have ensured that the park will be distinctly Vancouver in its design. Other elements, such as a resilient shoreline built for sea-level rise, native plants, and green infrastructure for stormwater management, also make adapting to climate change a strong design theme. These environmentally conscious directives are emphasized in a variety of Vancouver policies, such as the Climate Change Adaptation Strategy, the Biodiversity Strategy and the Bird Strategy, policies that this park is promising to unite together on a large scale.

Our next meeting is set for January 18. In the meantime, please send any issues you’d like raised or questions you’d like answered around the park’s design or the consultation strategy to wendee@vancouverpublicspace.ca.