Arbutus Greenway, pt 2: next steps (on a temporary path)

Earlier this month, we reported out on our involvement with the City of Vancouver’s workshops on the Arbutus Greenway, as well as the design considerations we offered as part of the discussion. On October 15, the City held a follow-up session to report out on their engagement findings. We are pleased with the approach taken.

In a nutshell, the temporary path will be paved, and will have separate tracks for cyclists and pedestrians. In some sections, the City will also pilot a parallel pathway of mulch, to give jogger, naturalists and others the option of a more naturalized pathway. These updates are all consistent with the VPSN’s earlier recommendations.

For pathway design and consultation feedback, you can view the City’s information boards (which include the temporary design) and workshop summary report (PDF). Of note: participants consistently emphasized the values of accessibility, inclusion and safety. 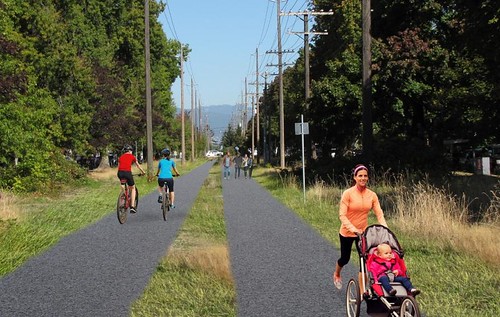 We also used the Oct 15 session to ask the Engineering Department about the long-term prospects of a streetcar on the Greenway. As many of you will know, there’s no immediate plan or timeline because the streetcar isn’t funded; however, our question concerned technical feasibility related to the width of the right-of-way. In response, we were told that where the greenway is 20m wide, this would allow for 10m for people plus 10m for a streetcar. Where width is insufficient, the City would look into utilizing more of the adjacent street for purposes of accommodating track.

The next steps, according to the City:

The VPSN will continue to be involved in discussions on this important space. In the next few weeks, we’ll be visiting spots along the greenway to see the designs as they roll out piloted. We’ll also be looking ahead to the next round of engagement and providing our input as needed.