A few weeks ago, Janette Sadik-Khan was in town to share stories of her time at the helm of New York’s Department of Transportation. The event coincided with the recent release of her new book – an engaging read titled Streetfight: Handbook for an Urban Revolution (co-written with her former press secretary Seth Solomonow).

Sadik-Khan is widely regarded as one of the driving forces behind a series of groundbreaking public space initiatives. In the six years she was Commissioner (2007-13), she oversaw the installation of 400 miles of bikelanes, 60 plazas – including the radical pedestrianization of Times Square – new street design guidelines and a slew of other transformative projects.

In addition to an impressive transportation-related CV, Sadik-Khan is also a lawyer by training — which perhaps explains her ability to turn a phrase. Her talk, delivered to a full house at the QE Theatre Playhouse, was replete with quotable moments. We’ve compiled some of our favourite lines as a way to share some of the content of the event. 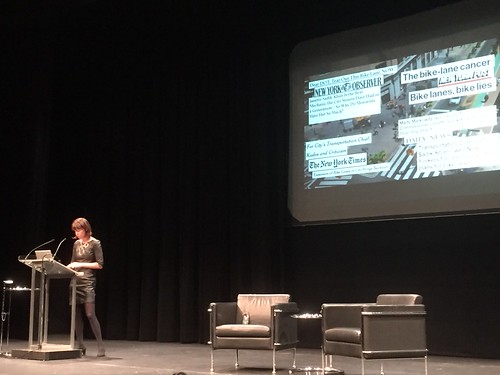 1. Streets are what makes a city great, or not so great. For a long time now, we’ve been governed by a dashboard view of the road.

Streets are a huge part of the public domain – often accounting for over 30% of the land-area in a city. Great streets are the defining element in cities… but all to often, the perspective on how they should function – and whom they should serve – is focussed around the automobile. The tendency – at least for much of the 20th century – was to downplay and even exclude the needs of pedestrians, cyclists and transit riders.

The consequence of that exclusion is an economic, social and health catastrophe. Congestion wreaks havoc, traffic crashes are a leading cause of death, and building more (or wider) roads only amplifies the problems. (Sadik-Khan quipped: is there a profession other than traffic engineering where 33,000 people a year die and no one gets fired?)

Changing this “dashboard perspective” is about shifting focus to other road users. Importantly, this doesn’t mean getting rid of cars; rather it’s about a better balance. 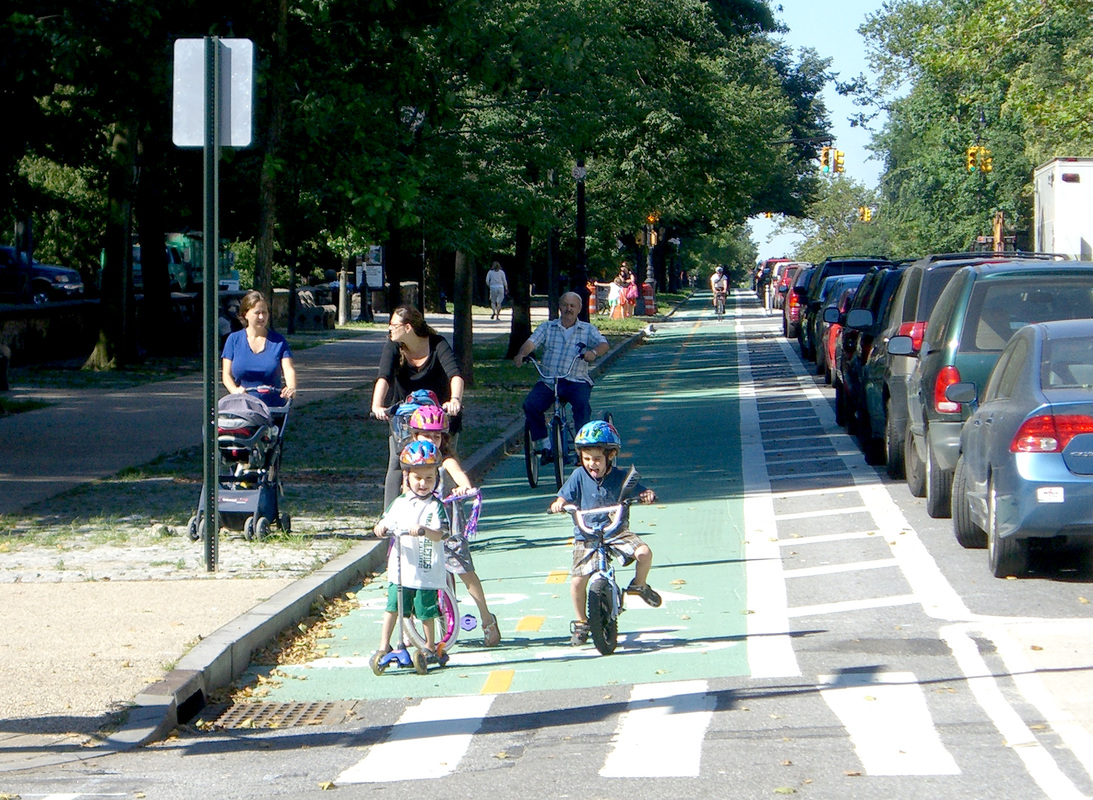 2. Paint the city you want to see… you can accomplish a lot with just the supplies you have on hand

Introducing positive changes does not require massive expense, nor even comprehensive planning and years of study. In fact, you can accomplish a lot with some short and sweet interventions.

This is Sadik-Khan espousing the “lighter, quicker, cheaper” approach that is the hallmark for a lot of good placemaking. In essence, this speaks to the ease with which you can get people to think differently about a space – by planting a few flowers, putting out some simple lawn chairs or a public piano, or hiring a local artist to paint a mural. These are the sorts of vehicles that lend themselves to overnight transformation.

As a plus for city governments – the cost of these projects, coupled with a can-do attitude on the part of electeds and bureacrats, is a great way to eliminate the institutional paralysis that can sometimes characterize bigger public space projects. Or put another way: you don’t need to over-think a street mural. If it really sucks, you can always paint something else.

3. Once you adapt a space, people adopt it

The short-n-sweet interventions described above can be a fantastic means to foster a sense of ownership amongst the public. One of Sadik-Khan’s best known projects involves closing Times Square to cars. The ensuing plaza space that was created was initially decorate with paint and low-cost lawn chairs. 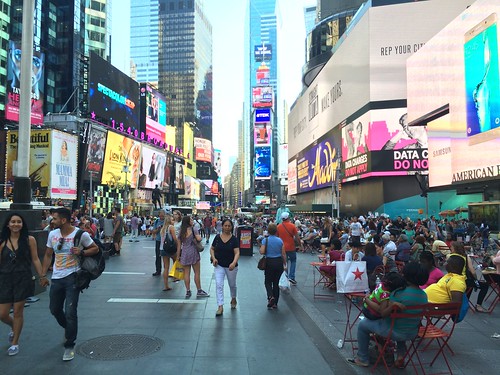 You might think, in car-obsessed New York, that this would be a recipe for on-going complaint… and yet, after some initial hand-wringing in the lead-up, the discussion, post-closure, almost instantly moved to a debate around the colour and quality of the chairs. People had taken ownership over Times Square within a matter of hours.

Again, adapting a space isn’t that difficult. City Studio’s excellent “Keys to the Street” program began with a series of free pianos (thank you Craigslist) and a few cans of paint. For the cost of a few 2nd hand chess boards, another local placemaker we knew created games nights at the North Plaza for two summers. Easy stuff.

(A sidenote: Sadik-Khan gave a nod to the “tremendous talent” in the local arts community, encouraging their involvement in the process.)

This phrase is hardly the brainchild of Sadik-Khan – so it’s a bit self-reflexive in that regard. We reference it because the presentation made clear the fact that no city, even one as endlessly creative as New York, needs to feel bad about borrowing and adapting placemaking ideas that come from somewhere else. After all, why reinvent the wheel when you can utilize a good initiative that’s already been tested?

Part of the New York transformation had its roots in Copenhagen – when a group of top decision-makers visited the capital of Denmark and saw the bike-friendly city with their own eyes. This is big-scale “borrowing” – one municipality sussing out another way to approach transport infrastructure – but there’s lots more that can be done on a variety of scales. Thanks to the instantaneous nature of social media, you can see new examples popping up on a daily basis.

This idea of stealing good ideas made us wonder: why would there be there any shame in doing this? Is there a fear of being derivative? Is it the notion that our city (or any city) is so utterly unique that cool ideas from other places wouldn’t make make sense on home turf? We’ve certainly heard people make the “claim for uniqueness” in the case of local public space (our favourite variant: “a central public square in Vancouver would never work because the city is too rainy — this isn’t Europe don’t you know!”)

In our experience, such friendly adaptation doesn’t make a city any less innovative; rather the sharing of good foundational ideas – whether formulas for simple street closures, or methodologies for cycling programs – can actually lead to interesting variations, riffing, and the emergence of entirely new initiatives.

5. In God We Trust, Everyone Else Bring Data

Another great riff. This line was borrowed from Sadik-Khan’s boss, then-Mayor Michael Bloomberg. Bloomberg was a strong adherent of evidence-based decision-making. Not only was data a key point in launching various public space programs – but it became a major factor in ensuring that their continuity and expansion. New bike lane and rapid bus lines were monitored for a range of impacts – related to traffic flow, business, safety and more. The success of these programs – and the numbers to quantify this success – provided the impetus for forging further ahead.

Caveat emptor: Data is only as robust as the data-gathering tools, methods and analysis that are brought to bear. New York has invested heavily in its research approach, and the result stands up to scrutiny. Poorly written opinion surveys (coincidentally, like the one an East Vancouver BIA released on the same day as Sadik-Khan’s talk) don’t help anyone. Exhibit A in the cateogry of leading questions: “Do you feel that separated bike lanes will negatively impact business by decreasing customer traffic, resulting in fewer sales and ultimately potential job losses as a result.?”

That’s right, vote for bikes at your peril, you job-killing, business-destroying heathen!

6. Follow the people, follow the footsteps. Look where people are walking today and you can see the city of tomorrow.

And on the subject of research… this line gives a nod to the role of observational studies, both for understanding how cities are actually used (e.g. the popular spot to jaywalk that’s a couple blocks away from the crossing lights) and for identifying where change needs to take place (e.g. where this desire line gets strengthened with improved pedestrian protection measures). The big point here is that the sociology of movement (quite) often differs from the cleaner and more rational assumptions that have typically informed 20th century traffic engineering. Good cities need to acknowledge and respond to this reality. In doing so, considerable gains can be made. 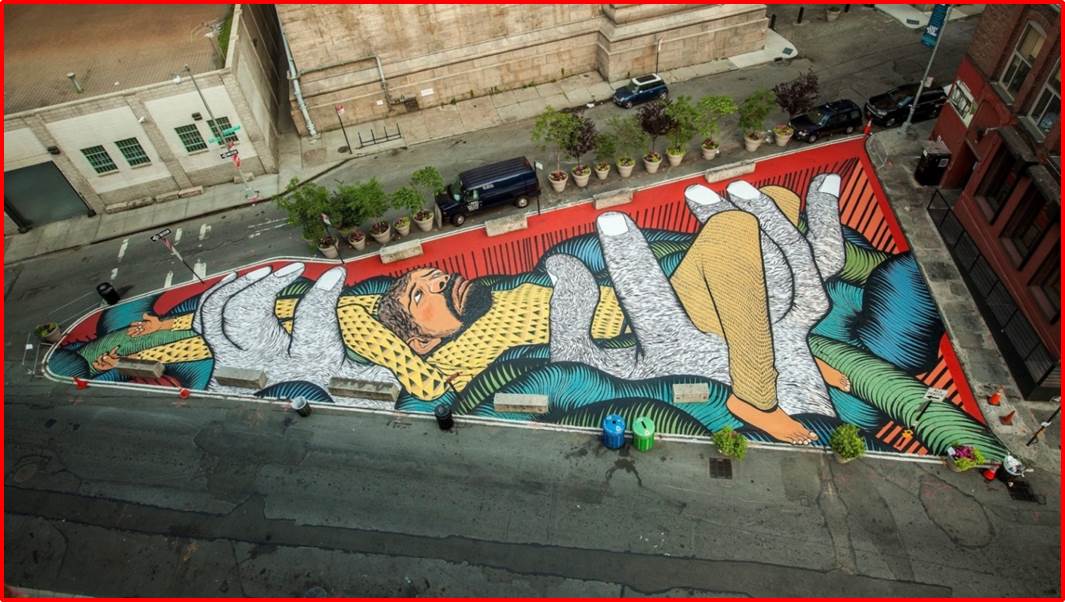 7. Plazas and bike lanes, once installed, are now part of the status quo.

It can be a struggle to implement change. Given the neurology of cognitive biases, we actually seem to be hardwired against it. And yet, one of the beneficial consequences of introducing new people-friendly infrastructure is the opportunity to change – to redefine – the status quo.

Taking the plunge with new public space infrastructure – closing streets to cars, expanding sidewalks, creating plazas – meant that the previous “everyday normal” of cars, cars, cars, was transformed. This wasn’t easy (and to be sure, there are still people that grumble at Sadik-Khan about her initiatives) — and yet, when there are obvious benefits, then it also doesn’t take long for the good stuff to define a new, more positive status quo.

In practice, what this meant in New York is that residents came out in droves when the new administration of Bill de Blasio publically mulled the idea of both reopening Times Square to cars, and removing some of the other plazas and bike lanes that had been installed. The idea was quickly (and wisely) dropped.

Burrard Bridge is an excellent Vancouver example. In 2009, there was a major outcry about the impending carmageddon that would result from replacing a car lane with one for bikes on this important bridge. Fast forward to 2015. When the City announced that a sidewalk would replace a car lane, there was barely a whisper of complaint. 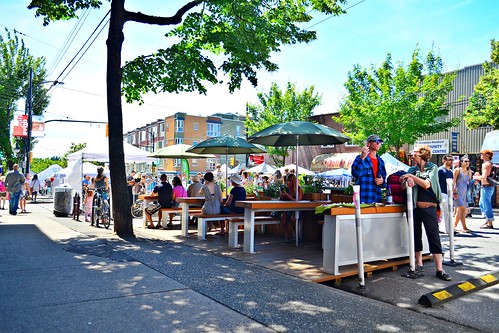 8. Just try it. You can’t argue that our [current] streets are so perfect that you can’t try anything.

This sounds a little like the advice your Mom used to give… but that’s okay, because it’s actually a really important point. It is very easy to shoot down interesting project ideas for any number of reasons: it’s been tried before, it’s too risky, we don’t do that here, the psyche or social fabric of the city will be upended, etc.

We are – as a species – extraordinarily good at saying no. Fear of change is a powerful syrup that can keep us glued in place, and some of these new ideas seem as unsavory as – well, broccoli used to be… before you realized it wouldn’t kill you.

There’s always room for improvement – especially where public space and active transportation considerations are concerned. We want – no, need – to make sure our streets are safer, friendlier and more liveable for everyone, so there is absolutely no reason that we shouldn’t be experimenting, innovating, trying pilot projects and figuring out ways to introduce change.

To us, the real question here isn’t whether or not whether to “try”, it’s how. There needs to be good dialogue between different actors and stakeholders up front, a willingness to genuinely test ideas, and an agreement to evaluate the results after giving things a fair try. This could – and should – mean additional changes, including reverting back to the former situation of the experiment’s results don’t support its continuation.

Good city planning and design is about taking those steps. No one stakeholder should be able to veto a decent experiment. Sadik-Khan noted: “no one has a patent on pavement. The public domain is the public’s domain.”

A side note on Vancouver’s long-standing summertime “experiment” – the temporary pedestrianization of the 800-block of Robson (in front of the Art Gallery). Gordon Price, in a post-talk Q&A, asked Janette Sadik-Khan about whether or not the site should be permanently closed to cars (as is being proposed at City Council this week). Sadik-Khan made a few remarks about Times Square, ending with “try it out, do it… you’ll like it!

That seems pretty reasonable to us.