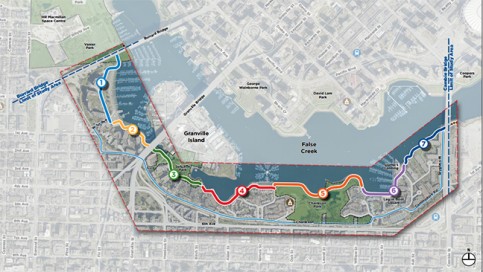 The City of Vancouver wants your opinion on proposed improvements to the south seawall, between the Cambie and Burrard Bridges. The first event, hosted by the City of Vancouver’s Active Transport Team at the Granville Island Hotel, took place last Saturday. A second event takes place on Tuesday, February 2. Residents and users of the space have a chance to comment on the plans to improve safety for pedestrians and bikers on this, the oldest portion of the Vancouver seawall.

The portion of the seawall under consideration dates back to the mid-1970s, and features a series of particularly windy and narrow sections, as well as a variety of surface treatments. It’s also one of the most picturesque areas of the city, and runs adjacent to a number of open spaces (including Charleson Park, Sutcliffe Park, Leg-in-Boot Square and Granville Island) as well as the False Creek south neighbourhood. It’s frequented by locals and visitors alike, and provides stunning views of the Vancouver skyline.

Poster boards detailing the improvements focused on pedestrian and biker safety, especially on designs separating bike and jogging/walking lanes. City staff will be on hand to answer questions and get feedback.

For more details about the plans, check out vancouver.ca/seawall or visit the open house. The event takes place today from 4 to 7pm at CityStudio, 1800 Spyglass Place. You can also provide feedback via a short online questionnaire (deadline: February 19).