On bikes, budgets, and making more room for the sidewalk

On Thursday, City Council will be hearing a report and presentation on “Active Transportation Update and Pilot for Skateboarding in Protected Bike Lanes” – which includes a program for cycling infrastructure improvements over the next five years.

As you’ve probably heard, a sizeable component of the discussion is devoted to several new bike lanes that are proposed for the City, including a number in the downtown core. 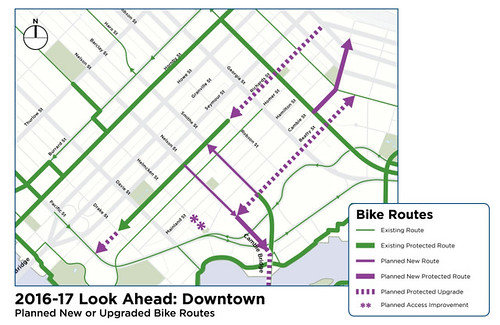 This is an important step forward for biking in Vancouver, offering further legitimacy and support to cycling as a mode of transportation. However, it also, indirectly, raises some interesting questions about the City’s attention to pedestrian issues and pedestrian infrastructure.

But before we get to that, let’s start by noting some of the many generally favourable articles and posts written about the bike lanes, including CBC and Metro and Vancity Buzz, among others. It’s perhaps equally telling to make note of the articles that aren’t being written. Whereas previous bike lane discussions (Burrard, Hornby, Dunsmuir) have generated all sorts of froth, it’s good to note that the backlash against bike lanes appears to have quieted. Maybe not everywhere, of course, but in a lot of corners. Even former opponents, like the Downtown Vancouver Business Improvement Association, have now come out in support. Cycling infrastructure is rolling forward indeed.

So, we’ll happily go on record noting our support as well. And we will be writing to Council to say as much. For us the new bike lanes do a number of things: 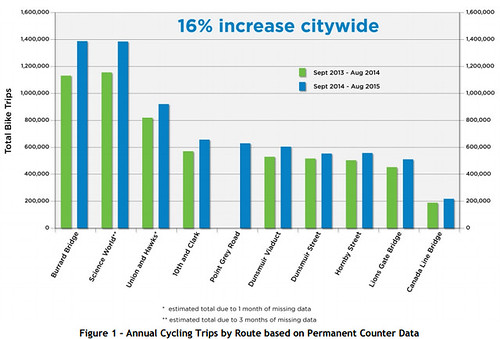 But, let’s bike-park the cycling question for the moment.

We also think this is the right opportunity to raise a note of concern about the “Five Year Update”. And it’s not a small note. It’s a fundamental one.

Active transportation is supposed to be about cyclists and pedestrians. With that in mind, the staff report being considered on Thursday, should outline a five year plan for both of these modes of transport – and everything else self-propelled and ‘active,’ including wheelchairs, skateboards, push scooters and more.

Its revealing, then, that the aforementioned report uses the word “pedestrian” only twice in its 16 pages. “Walk” or “walking” fares a little better, showing up 17 times in total. Compare “cycling” (59 uses) and “bike” (66 uses) and you get a sense of the report’s priorities.

There’s more. The word “sidewalk” appears eight times, and if you look at how this term is used, the sense of priorities crystallize a little further. Almost inevitably the references talk about the benefits of bike lanes as a way of improving walkability – because they will, in theory, take bikes (and now skateboards) off of the sidewalk. Now, this is good move, to be sure – but there is a lot more that needs to be done to improve pedestrian infrastructure than just the subtraction of cyclists from city sidewalks. 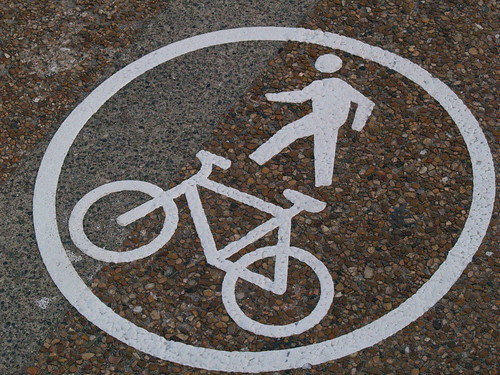 With very few exceptions, everyone uses pedestrian infrastructure – including cyclists, transit users and car drivers – and we think the present report ought to go further and spell out a more tangible action plan for the most essential, most universal, mode of transportation. There’s much that a ‘5 year Action Plan’ might conceivably say about pedestrians; this present report misses an important opportunity.

Which brings us to a more fundamental discussion taking place at Council on today: on the subject of the 2016 Budget. It’s at this meeting that Council will deliberate over the allocation of hundreds of millions of dollars in capital and operating funding, covering every aspect of municipal operations.

Despite the fundamental – even existential – nature of pedestrian mobility, and notwithstanding the fact that pedestrians are prioritized in the City’s Transportation 2040 plan, the actual municipal investment in qualitative and quantitative improvements to pedestrian infrastructure has flat-lined in recent years. Last year, the City’s budget for sidewalk rehabilitation was a paltry $1million. This year, the figure is the same… and that’s a million that is meant to fund repairs to a civic asset that is 2,100 kilometres in length.

Of course, there are other line items that support walkability. The 2016 budget proposes $875,000 will go to new pedestrian and cycling signals. An additional $325,000 is allocated for new curb ramps. But at several thousand a pop for either of these types of infrastucture, the budgeted funds will not last long. The curb ramp budget, for example, will cover approximately 60 of the 6000 ramps that are estimated to be needed across the city.

The same story holds for the $275,000 in new sidewalk construction funds. The amount sounds like a lot at first blush, but it actually only means between 3-5 kilometres of new sidewalk will be built. 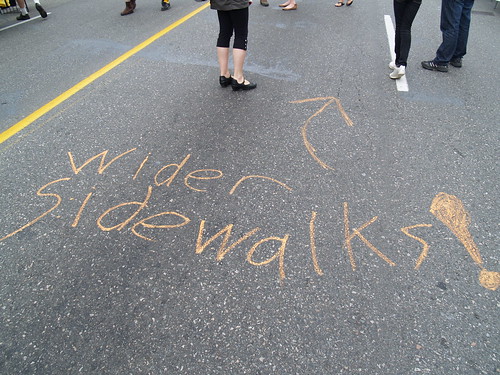 This is problematic enough for safety reasons. Our pedestrian infrastructure may not need to be perfect (a few cracks, a bit of warping from tree roots and you get the addition of character), but it could certainly stand to see more investment. Character aside, the city does have a lot of pedestrian spaces that are in need of real improvement. The annual budgets have been granting very limited means to meet this need.

Finally, there’s yet another angle to consider: the opportunity – the real possibility – to think of our sidewalks as critically important public spaces, not just corridors for people movement. Key sidewalks, especially on our extraordinary high streets ought to be places for gathering. They ought to be beautiful. They should be a key part of making our civic spaces sparkle.

The City’s Transportation 2040 Plan speaks eloquently about the need to make walking “delightful.” That’s a wonderful word for policy… and we should have sidewalks every bit as worthy of that aspiration.

Alas, if we’re after sidewalk widening and the more generous ‘complete street‘ designs that many city’s are experimenting with, the opportunities presented in both policy and budget are likely be constrained, and driven largely by redevelopment opportunities than a more proactive, city-led approach. Similarly, if we want something more than minimalist concrete, a $1 million “rehabilitation budget” means we can kiss any hope of pavers, cobblestone and decent design treatment goodbye. There are exceptions, of course, but the dollars-and-cents reality of the sidewalk budget makes this an impossibility on any decent scale.

It doesn’t have to be that way, of course. We think it’s time to see Active Transportation priorities (and the associated capital allocations that sustain them) focus more meaningfully on the pedestrian realm. Not at the expense of cycling infrastructure, but as a proper compliment to it.

In the past several years, Council has turned the wheel forward with some incredible investments cycling infrastructure and policy. It’s now time to make similar strides with the same rigorous and game-changing investment in our pedestrian realm.