The annual Zombie Walk (Saturday, September 6 at 3pm) begins in the North Plaza of the Art Gallery (aka Court House or Centennial Square), revealing that zombies – like the rest of us – appreciate the merits of a good public gathering place.

If you haven’t stopped by to see the pre-walk zombie gathering, consider taking a peek. It’s a bit of good natured fun. The zombie apocalypse – and its local, more celebratory “walk” – is nothing if not an adventure in the use of public space.

Vancouver zombies are generally a peaceable bunch, using the afternoon to animate some of the key gathering spaces in the city, and bringing a colourful bit of grotesquery to some key downtown streets and spaces. Unlike the movies, Vancouver zombies have also been known to smile and laugh, use smart phones, and contribute to the local economy by purchasing vast quantities of face paint and weed. Many of them will even be kicking off this years walk with something truly west coast: Zombie Yoga. Don’t stretch too hard or… Oh god. Lost an arm.

(As a side note to the designers out there, it’s possible that the North Plaza’s current bark-mulch groundcover is only truly successful during this event. It’s an especially suitable treatment, given that, like the zombies that trudge upon its surface, it has a bedraggled look and speaks a bit to the idea of decomposition. We shall have to see if the zombies are as enthusiastic about the space after it’s redesigned.) 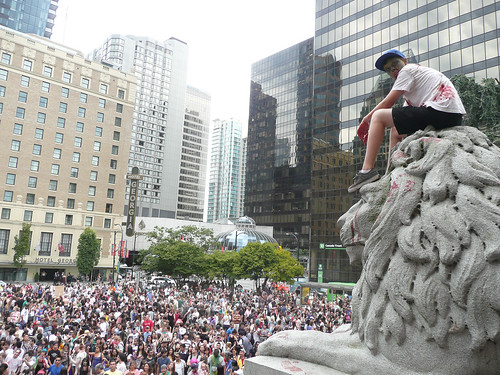 On a perch. Zombies gathered in the North Plaza. 2012.

The connection between zombies and public space runs pretty deep indeed. To wit: you’ve probably seen how this plays out in the movies: zombies roam, while the rest of humanity engages in a cycle of fleeing, finding refuge, fleeing again. Much of it looks, from the comfort of the theatre seat or sofa, like a prolonged parkour exercise. A most recent example: handsome Brad Pitt in World War Z, racing down the streets of one urban environment after another. An earlier film, 28 Days After, showed much the same thing. In both these films we learn that the zombies can also engage in a good bit of free running. Inevitably, of course, some of the living are lost to twisted ankles and gangs of pouncing, biting undead.

To that end, you may be pleased to learn that questions of zombies and public space are covered in at least one text dealing with life in a post-apocalyptic world: Max Brooks’ The Zombie Survival Guide. The book is reassuringly subtitled “complete protection from the living dead.”

For those planning to not be bitten/get infected/roam, a text like this should, in theory, help to navigate the tricky days ahead. Regrettably, the utility of Brooks’ text is a bit mixed; the advice is sometimes uneven, the underlying assumptions perhaps, at times, a little suspect.

For example, a section specifically identifying public spaces, goes through a list that includes, in this order: office buildings, schools, hospitals, police stations, retail stores, super markets, shopping malls, churches, warehouses, piers and docks, ship yards, banks, cemeteries, capitals and city halls. Truly a hodge-podge of buildings and spaces – some of which are very much privately owned and administered. 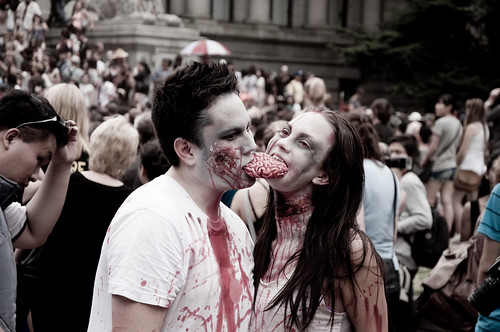 Kind of beautiful. Not unlike that scene in Disney’s Lady and the Tramp. Photo: Matthew Grapengieser.

If there is a redeeming quality in this list, perhaps its that it highlights the ‘greyness’ that exists between public and private, with space that’s used by the public often being read as the same thing as public (as in, publicly owned and operated) space. It’s a common definitional challenge that comes with the term, though take note: if you’ve seen Dennis Hopper’s megalomaniac performance as the head of a private (and very) gated Pittsburgh community in director George Romero’s (2005) Land of the Dead, you’ll know this blurriness of “public” disappears quickly when the zombies actually start to gather.

The shopping mall angle is an interesting one. Much of Romero’s earlier (1978) film Dawn of the Dead actually took place in an enclosed retail plaza. It featured a fine, if none-too-subtle critique of consumer culture.

Francine: What are they doing? Why do they come here?

Stephen: Some kind of instinct. Memory. What they used to do. This was an important place in their lives.It’s what they know. Its what they’re used to.

Fair point, Mr. Brooks. There have even been a few legal challenges that have advanced the notion of shopping malls as spaces that contain elements of publicness. You can even thank the late Jack Layton for pushing the idea that malls could be sites for political expression. (Layton, to be clear, is not a zombie, though some might say he does a good job of inspiriting the federal NDP – which probably isn’t a bad thing given the recent resurgence of their Liberal counterparts).

Most critically though, Brooks’ “public space” chapter does little to speak to streets, plazas and most greenspaces – something of an omission given the happy haunting grounds occupied by Vancouver Zombies, and their outright prominence in urban environments.

This is not to say there aren’t lessons to be distilled. We learn, for example, that cemeteries (the one urban greenspace mentioned) are actually not that bad for seeking temporary refuge (it being harder than you may think for people six feet under to escape their graves).

…And if by some miracle, a corpse did come to life inside its coffin, would it really “rise from the grave”? To answer this question, one must ask another: how?

How indeed! Brooks’ book does deserve some kudos for its important myth-busting work.

We learn, likewise, that buses and armoured vehicles may sound like good ideas, but aren’t all that readily available. SUVs, trucks and cars are also given a bit of a rough ride: not all are equipped for the sort of rugged escape that might be needed. Gas and mileage issues, he notes, can also be a real problem (and frankly, everyone knows that at least one of your party will perish at the gas station).

One possible solution? The bicycle!

The common vehicle is fast, quiet, muscle-powered, and easy to maintain. Add to this the additional advantage that it is the only vehicle you can pick up and carry if the terrain gets too rough. People using bicycles to escape from infested areas have almost always fared better than those on foot.

This latter point is a decent one to emphasize, as it speaks directly to the additional value of separated bike lanes and bike infrastructure. For the grumblers still out there, take note: there are dividends in this stuff that you haven’t even contemplated. 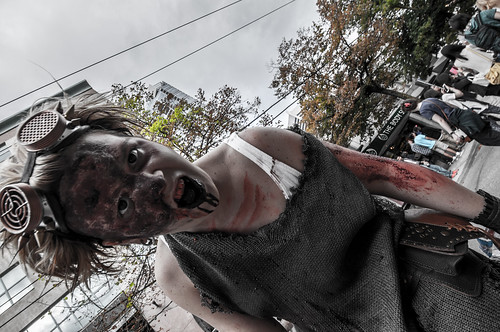 Zombies make their way down Robson to Denman. Photo by Matthew Grapengieser.

Of course, the real challenge that comes in The Zombie Survival Guide is this: cities in general take a bit of a drubbing. Or as Brooks rather bluntly put’s it: AVOID URBAN AREAS (emphasis his), and later, writing more poetically, “within [city] boundaries will be a maelstrom of unspeakable chaos.”

It’s tempting to view this as excessive hyperbole – a bit of sneaky city-bashing. Apparently, though, there are hard numbers to back this directive up.

No matter what your chances for survival are during an infestation, they will undoubtedly drop by 50 if not 75 percent when traversing an urban area. The simple fact is that a place inhabited by more living will have more dead.

On top of this, there are additional perils: marauding ruffians, friendly fire from living zombie “hunters”, and – take note engineers – the reality that hard concrete surfaces may not muffle footsteps as well as soft ground. (To which we add: hope to hell that the Zombie apocalypse doesn’t happen during the rainy season, as the schlopping noise of people marching through muddy greenspaces isn’t going to be helpful either).

Perhaps this is the urban dwelllers last stand. Ultimately, though, the “just get out of the city” advice isn’t helpful – or at least not where Brooks leaves it (which is to say, as an idea, stranded). The directive lacks rigour given our demographic reality – i.e. that over 50 percent of the world lives in urban areas. Moreover, like the suburban flight of previous generations, the idea of escape has some deeply embedded class and social justice dimensions that deserve to be unpacked. Who gets to escape, and how? Some better analysis of the urban condition – not to mention survival advice – in the event of a zombifying plague is clearly needed. Scholars of urban resilience and/or disaster management, please take note.

For the moment, rest assured, the Vancouver zombies you’ll encounter today promise to be better behaved than in the films. There’s no immediate need to cross the bridges to the hills of North and West Van, no call to activate our emergency routes or push across Boundary road into Burnaby. We are safe for now. Repeat. We are safe for now. 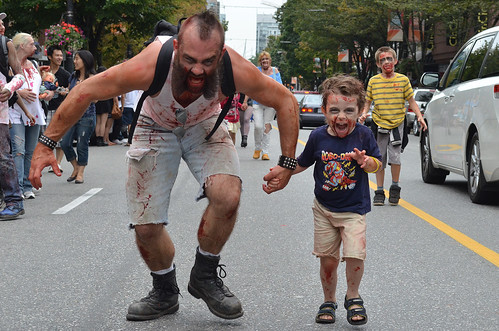 The Zombie Walk. An all ages, opportunity for the un-dead to reclaim the streets! Photo: Tom Magliery.