Earlier this month, Translink unveiled the latest stage of their review of Vancouver’s downtown bus network. The materials include a set of draft network design concepts — essentially modified routes for a number of downtown buses.

Translink is looking for feedback on these concepts, and the deadline to provide input is this Monday, April 21. We are strongly encouraging VPSN supporters to take a few moments this weekend to complete the online questionnaire.

If you support the enhancement of Robson Square and pedestrianization of the 800-block and/or the creation of a new plaza at the 600-block of Cambie, this is the time to weigh in.

Good quality public space and transit – both are needed!

The VPSN has been following the Bus Service Review closely – both as fans of public transit, and as advocates for public space. The review is much needed and has been prompted by growth and change in downtown neighbourhoods, the opening of the Canada Line, and the potential to create substantial improvements to the downtown public realm. As noted in Translink’s study materials “over the past twenty years the downtown population has more than doubled.” The Review will help decision-makers plan for transit service that meets the needs of residents and visitors to the downtown peninsula.

We are particularly supportive of proposed changes to the bus routes that would enable the expansion of Robson Square. The Review has identified short-term changes to support the summertime activation of the 800-block, but it also looks at potential changes to support the permanent pedestrianization of Vancouver’s pre-eminent public gathering area. The idea of creating an expanded public square around the 800-block has been discussed since the 1950s. The Bus Service Review options have the potential to enable the City to take a strong step forward on this initiative.

Figuring out what to do with transit – and ensuring good bus service for West End residents – has been the key sticking point in expanding Robson Square. Suffice it to say, we are excited to see the kinds of workable solutions the City and TransLink’s review process has yielded. The Review shows that it’s possible to have better transit connections and create a more vibrant public realm.

What’s in the Review?

As part of the review, Translink has identified various ways that bus service in and around downtown Vancouver can be enhanced. These are explored in options that relate to three areas of potential change:

It’s worth taking a look at all of these possible areas of change, and you can do this by looking at both general and technical documents that Translink has produced. The online survey also provides much of this background information.

Our particular area of focus is on the first of these three areas of change, as it most directly relates to the possibility of expanding Robson Square.

The Local Bus Review identifies two potential options in redesigning the bus routes that stay within the downtown Vancouver peninsula. These are referred to as the L-shaped Loop (option A1), or the Rectangular Loop (option A2). In their basic form, both of these options show bus service remaining on the 800-block of Robson, but, both proposals also include alternate routings that would facilitate the expansion of Robson Square, and the creation of a pedestrian-only space on the 800-block.

Here’s option A1 – the “L-shaped Loop”, with the Robson-closure ‘sub-option’ below: 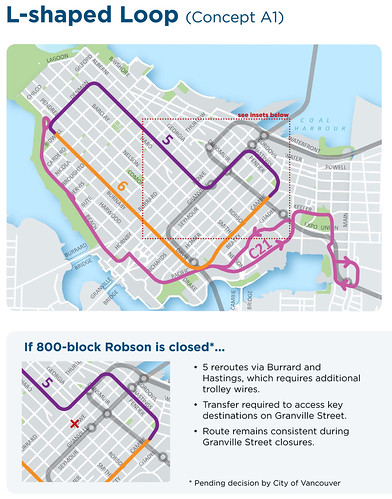 In this case the Robson Square variant routes the #5 north on Burrard (at Robson) and then east on Hastings and over to Cambie. With this route, the bus swings by Waterfront Station (or close to it). Its southbound route (along Cambie) then brings it in close proximity to key cultural services such as the library. The L-shaped Loop option also has a second ‘sub-option’ (not shown here) that accommodates the closure and pedestrianization of the 600-block of Cambie, but not the 800-block of Robson.

Here’s option A2 – the “Rectangular Loop,” again with the Robson-closure sub-option: 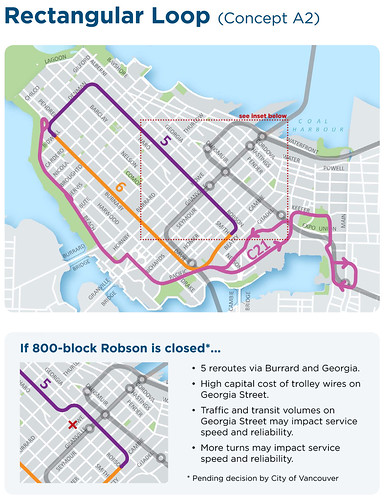 On the Robson Square variant of A2, the #5 bus turns north on Burrard to Georgia, and then over to Cambie – a route that would take the bus directly by both Canada Line and SkyTrain stations (at Granville), the VPL Central Library and other other key amenities and services – including the potential new home of the Art Gallery.

Again, it’s important to note that while both the basic A1 and A2 options offer interesting transit-focused improvements, neither support the expansion of public space at Robson or Cambie on their own. It’s the the various sub-options to A1 and A2 where these important enhancements are made.

Help support the creation of improved public space in downtown Vancouver. If you support the enhancement of Robson Square and pedestrianization of the 800-block and/or the creation of a new plaza at the 600-block of Cambie, this is the time to weigh in and share your thoughts on these proposed changes to the bus network.

How to have your say

The deadline for input is Monday, April 21. The online questionnaire can be accessed here, or by pasting the following link into your browser:

You can share your thoughts on the downtown-only routes, as well as the Cambie Bridge and Eastern Corridor routes. (The survey allows you to pick which of the three areas you want to talk about).

As noted above, much of the background information on the Downtown Bus Service Review can be found on the survey website; however if you feel like reading more there’s also an interesting backgrounder and technical paper that offers more details on the pros and cons of different route options.

Please do take a few moments to share your thoughts. This is a key opportunity for downtown public space, and your opinion is important.

Let’s prioritize a safer, more complete Commercial Drive – for everyone!
May 24, 2021