A quick update to let you know about two important initiatives related to Robson Square and downtown Vancouver’s public realm. They are time-specific, so please take a moment to read on.

Last year, Translink initiated a review of Vancouver’s downtown bus network (the routes and connections of buses and community shuttles operating on the downtown peninsula). The intent of this review is to facilitate better linkages between downtown neighbourhoods, improved connection to Canada Line facilities, and greater reliability of service.

Part of the motivation for this work also relates to key public space initiatives:

The Bus Service Review is an important opportunity. As noted in Translink’s study materials “over the past twenty years the downtown population has more than doubled.” The Review will help decision-makers plan for transit service that meets the needs of residents and visitors to the downtown peninsula. Equally importantly, it has the potential to play a significant part in the creation of some excellent new public spaces for the city.

This is particularly true in the case of an expanded Robson Square. Summertime re-routing of the #5 bus (to accommodate the temporary public space on the 800-block) has been a cause for concern among some West End residents. The VPSN has been calling for an exploration of alternatives that would enable these concerns to be addressed. Thanks to the Bus Service Review, we now have some options to look at – including some temporary measures to support the summertime transformation of Robson. 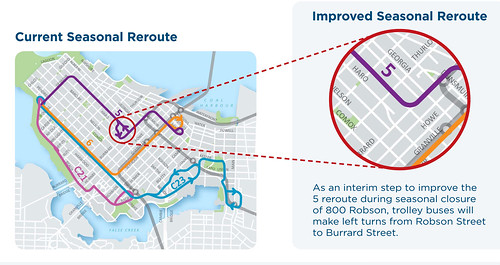 On April 2, Translink released a set of network design concepts for public review. The concepts feature alternative and enhanced routes for much of the downtown peninsula, as well as some eastern corridor routes (those routes coming in and out of downtown along Hastings, Powell and other east-side streets). The various options are assessed in an accompanying Technical Summary document, which reviews the various pros and cons associated with each. Of note: each of the alternatives also features a specific scenario relating to the expansion and pedestrianization of Robson Square.

Translink is asking for your opinion on these ideas. Please lend a hand by attending a public open house or sharing your thoughts online.

There are three upcoming events (one also took place this past weekend) where you can weigh in with your thoughts. These take place:

You can also review open house materials and share your ideas at via an online questionnaire – both available at translink.ca/downtownbusreview. Deadline for input is Monday, April 21, 2014. 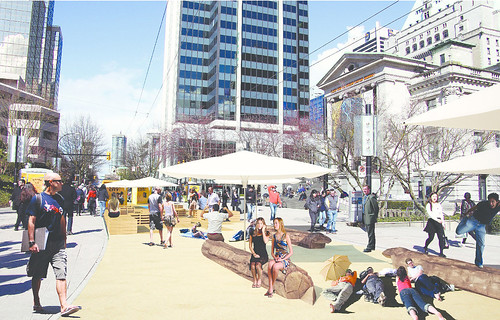 Earlier this year, the City of Vancouver launched Robson Redux, a design completion to “build and install a temporary public space installation that will transform the iconic 800 block of Robson St. in downtown Vancouver into a pedestrian plaza for the duration of summer 2014.”

This will be the fourth straight year that Vancouverites (and visitors) will get to play in an expanded Robson Square. Previous transformations included “Picnurbia” (2011), “Pop Rocks” (2012) and “Courderoy Road” (2013). However, 2014 marks the first year that the design competition format is being used.

There are two awards being given – the Jury Selection and the People’s Choice award, and last Thursday, the City held a wildly successful event at the Vancouver Art Gallery that launched the public voting component. With a total of 79 different concepts in play, it is fair to say that a tremendous amount of creativity has been brought to bear on the creation of a vibrant summertime space.

You can view all of the concepts – and choose your favourites – online. The deadline for People’s Choice voting is Sunday April 13.